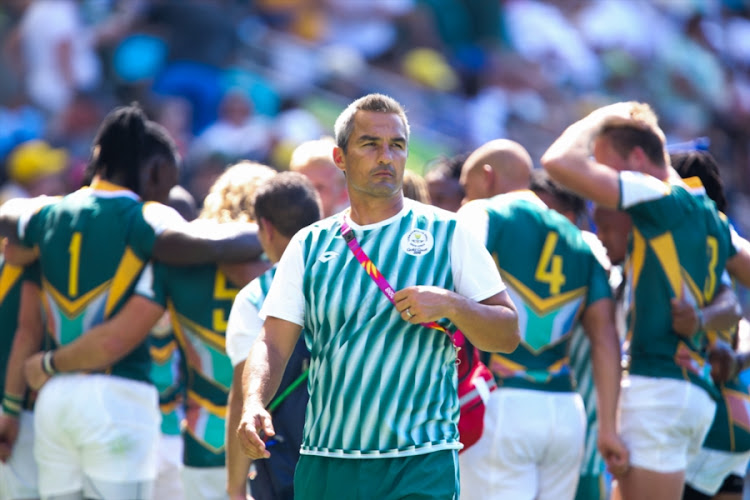 Whatever the Blitzboks do in the penultimate round of the HSBC World Sevens Series in London this weekend‚ they have to finish above log leaders Fiji.

The Pacific islanders hold a four-point advantage at the top of the standings over the defending champion Blitzboks with only London and Paris remaining in the 10-leg series.

South Africa can’t win the 2017/18 World Series in London this weekend‚ but they can lose it if Fiji widens that gap over their only rivals for the title.

It’s no wonder then that SA coach Neil Powell made it a priority to recall leading try-scorer Seabelo Senatla for the final two legs of the tournament.

Defence and structure has given the Blitzboks consistency this season with eight consecutive semi-final appearances‚ but they have lacked Senatla’s deadly finishing during the past four tournaments while he was on Super Rugby duty.

Maybe it’s coincidence that Fiji won three of those tournaments while Senatla was away‚ maybe it isn’t.

Fiji have certainly returned to their best that saw them win the Olympic Gold medal in Rio in 2016.

Under coach Gareth Baber they took a season to rebuild following Rio‚ but they are now as consistent as the Blitzboks‚ but with more deadly weapons.

“It’s fantastic to be performing well‚ not just for the players and staff‚ but also the fans at home in Fiji‚” said Baber.

“There was a plan before the season started that we needed to look closely at certain elements of our game‚ specifically the physical make-up of our side. If we could get that right‚ we would be able to make it through all the tournaments on the series.

“We took a view that we wouldn’t look to peak too many times‚ but more to stay within a bandwidth we could consistently operate in for longer periods of time.

"You are never quite sure how it is coming together‚ but it seems like we are going in the right direction. We started slowly in Dubai and Cape Town‚ but the series is beginning to take shape now.

Winning their first tournament on the season in Hamilton in January was a turning point for Baber and. A bronze in Las Vegas and wins in Hong Kong‚ Vancouver and Singapore and a silver medal at the Commonwealth Games followed.

“For any group‚ you have got to see some wins to make it worthwhile‚ whatever that might be‚” Baber said.

“For us‚ winning in Hamilton‚ beating Samoa‚ New Zealand and South Africa created a bit of momentum and the players found the level they could operate at consistently.

“It was fresh in our minds after that‚ so when the players went back to Fiji they knew they had to operate at that level whatever they did‚ as South Africa had done the previous season. “We try and make every element of preparation competitive; sometimes it’s in team meetings‚ sometimes it’s in the gym. I like to put the players in situations that they will feel uncomfortable in.

“They love competition in every element. Backs versus forwards. Little quizzes. Small players versus big guys. They thrive in those tough situations‚ and that’s been very pleasing to see in tournaments like Singapore.

“They find the strength and experience to finish off teams when we look like we are dead and buried. That’s what great sportspeople are made of.

"My job is to take that “outcome pressure” away from them so they can just enjoy the game.”

The Blitzboks have been warned before their pool D clashes with Russia‚ Samoa and Canada at Twickenham.

After a frustrating Super Rugby campaign that has seen Seabelo Senatla become something unimaginable – ordinary – the crown prince of sevens is set ...
Sport
4 years ago

The Blitzboks will go into the vital last two tournaments of the World Sevens Series without the experienced Kyle Brown and hard man Tim Agaba.
Sport
4 years ago

The Blitzboks could face fellow Africans Kenya in the last eight of the Sevens World Cup to be held in San Francisco in July this year after the ...
Sport
4 years ago

Cape Town - For the first time since December 2016, the Blitzboks slipped off the top of the overall World Series standings after finishing fourth at ...
Sport
4 years ago

The Blitzboks paid a high price for their progress to the quarterfinals of the Singapore leg of the World Sevens Series, losing captain Kyle Brown ...
Sport
4 years ago