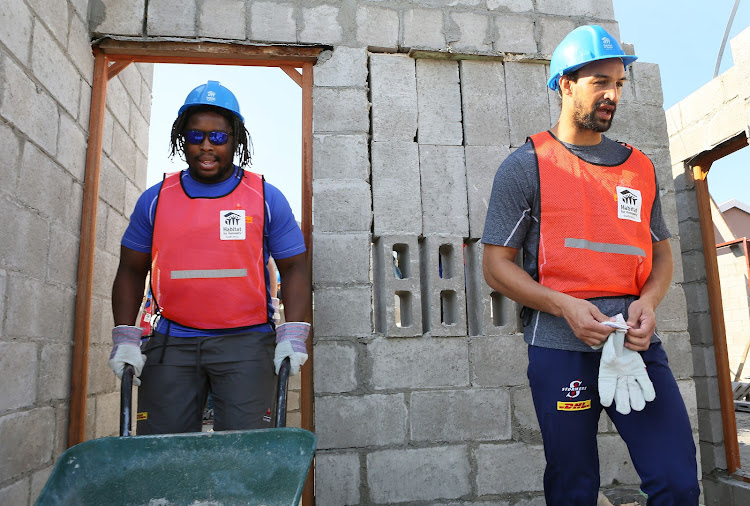 Dillyn Leyds is well known for his skills with a rugby ball as one of the most experienced backline players for the Stormers.

But on Wednesday he and his team could be seen passing bricks to each other in Mfuleni township outside Cape Town where they helped to build low-cost housing as their contribution to the legacy of Nelson Mandela.

Along with Cape Town City football club and the Cape Cobras provincial cricket team they helped to build five houses in Mfuleni as part of the Habitat for Humanity initiative‚ an NGO which builds social housing around the world and which is currently building 100 houses across South Africa.

“Habitat for humanity provides social housing‚ so building communities through housing and infrastructure‚” said Hulisani Takalani from Habitat for Humanity outside the building site of one of the houses where Cape Town City FC players were hard at work.

“We work with volunteers‚ usually corporate volunteers‚ but also sports people‚” he said.

From packing food parcels to handing out clothes‚ computers‚ school shoes and blankets‚ the sporting fraternity joined hands with the rest of the ...
Sport
3 years ago

Former president Jacob Zuma and his successor Cyril Ramaphosa put their political differences aside as they descended on Mvezo in the Eastern Cape to ...
News
3 years ago

“We have this Mandela build week to commemorate the hard years of Mandela’s life. So we are building five houses in the area and each day we have different volunteers‚” said Takalani.

The five houses being built in Mfuleni are being built in conjunction with the Western Cape department for human settlements and on pieces of ground where families once lived in makeshift shacks.

Leyds and his team-mates took quickly to the job of hauling cement and laying bricks‚ albeit awkwardly‚ but he said that it’s all about getting out of your comfort zone.

“It’s really nice for us to come out here and lend a helping hand to these people‚ for a man who did so much for this country‚” said Leyds.

“One day is never enough but I think the fact that we’re coming out here with two of the other representatives‚ being Cape Cobras and Cape Town City FC‚ and we as DHL Western Province really must stand together to show that this really means a lot to us and to continue the legacy that he left with us‚” said Leyds.

July 18 marks #MandelaDay. This is how people celebrated and spent their 67 minutes to honour the late Madiba.