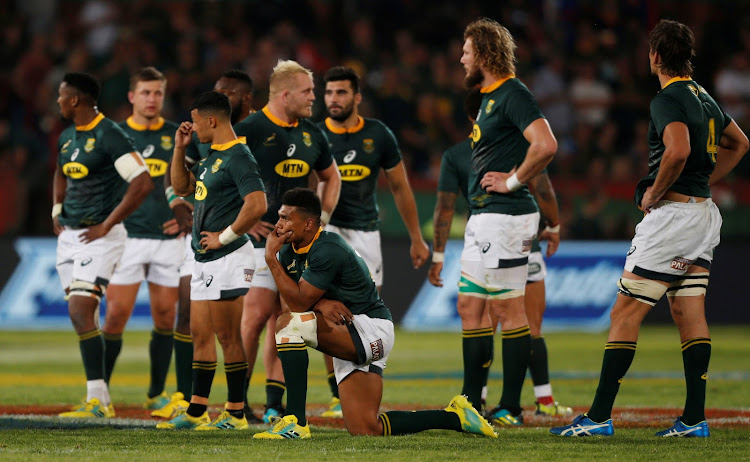 Springboks coach Rassie Erasmus has defended the flurry of substitutions he made late in the second half of the 32-30 Rugby Championship loss to New Zealand at Loftus on Saturday.

The Boks looked to have the match under control with a 12 points lead in the last eight minutes but they lost momentum as a result of substitutions to key players like Willie le Roux‚ Malcolm Marx‚ Faf du Plessis‚ Francois Louw and Frans Malherbe.

RG Snyman‚ Damian Willemse‚ Vincent Koch and Sikhumbuzo Notshe shared 26 caps between them and they were introduced in the last eight minutes of the match.

The hugely experienced All Blacks seized the opportunity and made the Springboks to pay a heavy price as they scored two tries by Scott Barrett and Ardie Savea in the last four minutes to win the match.

“I will never blame this defeat on the substitutions‚” said a clearly disappointed Erasmus after the match.

“If I blame this defeat on the subs‚ I must as well blame it on myself because the amount of game time some of them got over the past games since I have been involved in June hasn’t always been what one would have wished for.

“It was maybe because of pressure and wanting to win and that showed because New Zealand had experienced substitutions coming on and our boys did not influence the game‚ but that was not because of lack of effort.

“Willie (Le Roux) had concussion and I thought that Damian Willemse played well at nine.

"Faf (De Klerk) was cramping and those were two big substitutions. We put Vincent Koch quite early because Frans Malherbe was honest to say that he was tired.

"The game’s pace was such that we had to play catch up and I thought the substitutions did well when they came off the bench.”

With a healthy twelve points lead going into the last ten minutes‚ Erasmus said there was never at any point in the match where he thought the match was won.

“No‚ we did not think that the game was won after 72 minutes‚" he said.

"They are the number one team in the world and they have shown many times that they have the spirit and fight back and that is their culture.

"I was never comfortable in the match thinking that we had it in the bag.”

Despite the dispiriting loss‚ Erasmus said the Boks gave their best tactical performance in a while.

“I really think it was one of the best tactical performances in a while‚" he said.

"We spoke about how we have to match them physically and I really thought we handled them well tactically and physically for 72 minutes.

"I can talk about all the things we did wrong in the last 10 minutes‚ but they did a hell of a lot of things right in that period.”