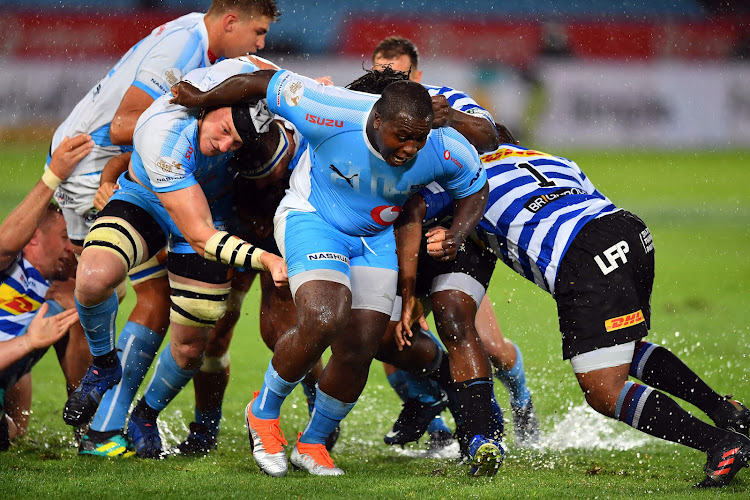 Trevor Nyakane of the Blue Bulls during theCurrie Cup game against Western Province at Loftus Versveld in Pretoria on October 13, 2018.
Image: Johan Rynners/BackpagePix

The Blue Bulls scrum bore the brunt of Western Province's explosive first half at Loftus Versfeld on Saturday and they need some fast fixing.

Their versatile Springbok prop Trevor Nyakane is all too aware of this‚ especially with the Blue Bulls conceding two tries from the set-play during Saturday's 34-7 drubbing at the hands of Western Province.

Nyakane said they had plenty to work on and their set-piece is one of the facets that needs rapid improvement.

Despite the wet conditions‚ Wilco Louw washed the Blue Bulls scrum away in a similar manner the storm in Pretoria did to proceedings on Saturday afternoon.

Louw and the rest of Province's bristling pack will be lying in wait for the Blue Bulls in Saturday's second Currie Cup semi-final.

“If you're a player‚ you know exactly what happened and there are a lot of things we need to fix on the training field before we can even think of going to Cape Town and doing something‚" said Nyakane.

"There are a lot of things we need to work on. It gets you angry as a tighthead when things happened like they did on Saturday because that's something that you're supposed to be good at and put bread on the table as a prop.

“If you don't take it personally‚ then you shouldn't be there.

"It's a hard one for us to swallow but fortunately for us‚ it's back to square one. It's a semi-final that we're going to play in and anything can happen.”

Nyakane said the team was not as switched on mentally and that's also an area they need to get right in the play-off game.

There's also the significant matter of finding parity at least against a Province side that adapted better than the Blue Bulls to the lake that was Loftus.

Western Province played in similar conditions earlier in the season against the Free State Cheetahs and they won that game comfortably.

“If you want to go to Cape Town and win‚ your set-piece has to be your strong point. If you're not going to dominate the set-piece‚ then you're going to be in trouble.

“We didn't pitch and that was a mindset. We need to be ready to rectify the errors.

"We've been scrumming well the whole season but I feel that mentally‚ we weren't there and when you're playing against a champion team like Western Province and you don't pitch‚ that's the result you're going to get.”

Nyakane's fitness issue have been under the spotlight this season as an assortment of injuries have prevented him from having a sustained run.

That's allowed the likes of Frans Malherbe‚ Louw and Coenie Oosthuizen to establish a pecking order while he convalesced.

Nyakane said he needs to focus on putting in shifts with the Blue Bulls before worrying about matters of national importance.

“I don't feel like I'm under pressure to prove myself to perform because at the end of the day‚ I'm trying to do well for the Blue Bulls and if the Blue Bulls do well‚ then it's easier for the coach to spot you.

“It's important to impress but it's better for me to impress within the structures and do what the Blue Bulls want at this point in time so when the coach sees me performing‚ he can be able to pick me.

"Yes there are good guys coming back but it's important for me to tick the boxes here at the Bulls because if you don't perform here‚ there's no reason for a call-up.”