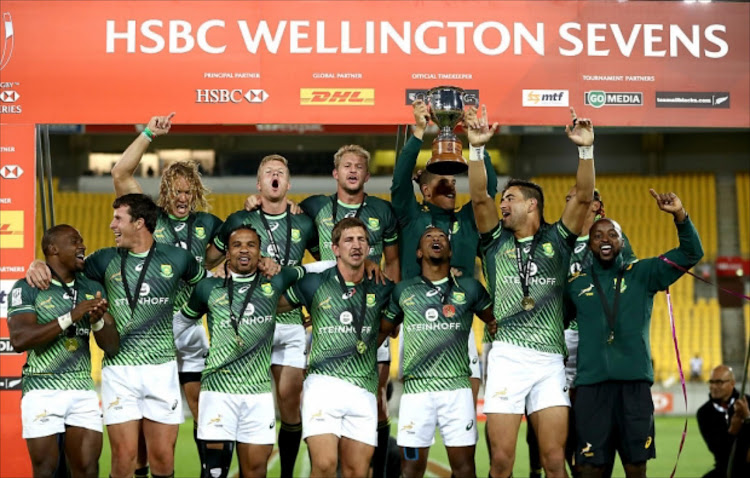 Blitzbok coach Neil Powell used 28 players in 2017/18 as he played a delicate juggling game with his players as they battled three major offensives in 2018‚ which resulted in another World Sevens Series title.

The Blitzboks left it late to win their third World Series title and their second in succession‚ taking the title in the season-ending Paris tournament in their 60th and final game of that campaign.

Going into the tournament the Blitzboks were seven points behind Fiji and all seemed lost.

But then the islanders suffered a rare quarterfinal defeat against England leaving the door ajar for the SA Sevens team.

The Blitzboks needed no second invitation and beat Spain‚ New Zealand and England in the knockout stages win in Paris and take the overall World Series crown with 182 points to Fiji’s 180.

It was a title won through consistently excellent performances.

There was certainly no shortage of drama in SA rugby in 2018 and below are some of the controversies that dominated the headlines this year.
Sport
3 years ago

The Blitzboks only won two tournaments – the first of the season in Dubai and the last in Paris. In between they made eight more semi-finals‚ five finals‚ were third three times and fourth twice.

In the ruthless knockout environment of the World Cup in San Francisco in July the Blitzboks managed a bronze medal and at the Commonwealth Games on the Gold Coast‚ they missed out on a medal altogether.

That was a disappointing return but the World Series is a true measure of a team’s ability over the course of a season and on that score the Blitzboks excelled.

The Sevens Academy‚ based at the Stellenbosch Academy for Sport (SAS) is where the Blitzboks’ successful blueprint is designed and implemented.

They had the vision to establish the centre on a shoestring budget in 2010 and they now contract 28 sevens players. It was that depth that won the World Series in 2018.

“We were the first sevens Academy in the world and England followed us‚” Schoeman said.

“New Zealand and Australia are starting academies. Fiji are the exception‚ but they have their own in-built academy‚ which is their genetics. They are incredible athletes.”

Springboks and Lions winger Aphiwe Dyantyi was outstanding this year after delivering breathtaking  performances for club and country.
Sport
3 years ago

The Blitzboks won the series at a canter the previous season‚ with one round to spare and by 28 points. This year‚ they needed every minute of the campaign to get the job done.

The Blitzboks were also struck by a swathe of injuries that ruled out experienced players such as Kyle Brown‚ Branco du Preez‚ Rosko Specman and Cecil Africa for lengthy periods.

Others such as Dylan Sage and Justin Geduld also missed tournaments along the way while Seabelo Senatla‚ Kwagga Smith and Tim Agaba only made an impact in the opening four tournaments before Super Rugby duty.

Despite his weakened squad‚ Powell leaned on the Sevens Academy to keep the conveyor belt of talent coming. And he wasn’t afraid to throw youngsters into difficult situations.

He sent a squad with five uncapped players‚ and only one player with more than 10 caps‚ to Hong Kong.

That tournament was just a week before the Commonwealth Games and Powell risked by keeping his older‚ more experienced players back.

The Springboks scored some memorable tries during the year and we have listed five of the best below. 5) Sbu Nkosi vs. England, first Test, ...
Sport
3 years ago

It meant a swing of five points in the islanders’ favour‚ but as damage limitation exercises go‚ it was a huge boost for the Blitzboks.

Schoeman sagely predicted that the benefit of youngsters’ performance in Hong Kong would only be fully appreciated later.

“Even though we didn’t win in Hong Kong‚ we are going to reap the rewards of what happened over the coming months and years‚” Schoeman said at the time.

They did that but they just didn't have the depth to win the World Cup sevens tournament after injuries to Senatla‚ Chris Dry and Afrika ruled them out of the tournament.