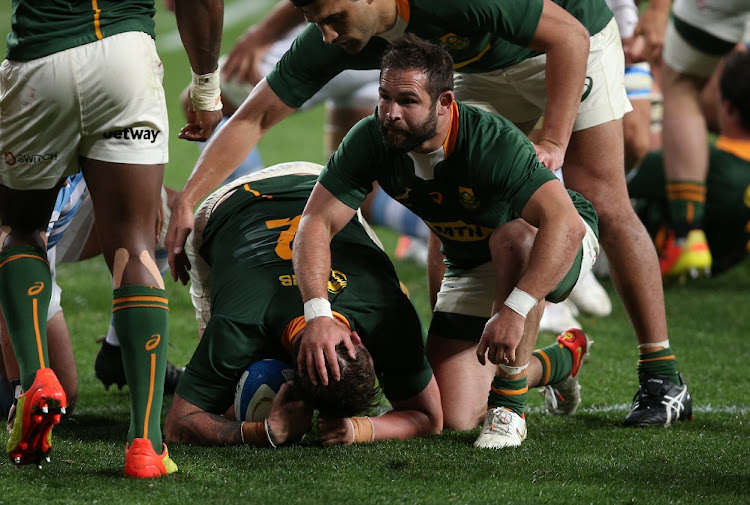 There were times in their 29-10 Rugby Championship win against Argentina at Nelson Mandela Bay Stadium on Saturday that the Springbok pack went about their business as if it were their last.

Who knows what the rugby gods have on their agenda in the coming weeks, but the Boks’ heavies played like men possessed.

They played with aggression, but equally importantly control, as they kept a tight grip on proceedings from the outset.

They so thoroughly vanquished Argentina’s forwards there were fleeting moments in which the Bok backs were allowed to revel in the space and time in the second half.

That of course only came once the Los Pumas were resigned to a lost cause. Artistic impression means little to the Boks who are hell-bent on making winning a habit.

This match could not be further removed from spectacle but the result never looked in doubt as the Boks set the standard in the primary phases, while their heavy carriers also helped keep Argentina on the back foot in the first hour. They will lament losing momentum in the final quarter.

Earlier, though, the Boks were very much in the ascendancy.

Franco Mostert again spread his influence around the park, Lood de Jager cut a towering presence at the line-out on the occasion of his 50th Test, and Malcolm Marx was as deft with his line-out feeds as he was a jackal at the ruck.

Steven Kitshoff, too, made an early impact off the bench as the Boks played with greater cohesion in the first hour.

Handré Pollard was right on key and he was also instrumental in advancing the Boks on the scoreboard initially.

Discipline, it was speculated, was going to be a determining factor in this game and so it proved, perhaps not for all the reasons first thought.

Having to operate in the face of so much pressure, Argentina abandoned the law book.

Gradually they fell on the wrong side of the ruck and in a more general sense the law and Pollard duly obliged off the kicking tee.

Argentina’s recidivism eventually caught up with them when their battleship No 8 Rodrigo Bruni was yellow-carded for drifting offside.

By the break, the visitors had conceded a staggering 13 penalties, which pretty much put paid to any ambition they had of getting an early foothold in the game.

Even then the Boks kept their cards close.

SA have not let the uncertainty over the future of this year’s Rugby Championship sparked by New Zealand’s stricter Covid-19 regulations affect them ...
Sport
11 months ago

If there were lingering criticism of the Boks’ dependence on the boot in making advances, they showed no sign of kicking the habit in this game.

They fastidiously went to the air and mostly succeeded in playing the game in Argentina’s half.

They kicked so often, Cobus Reinach had the odd box attempt charged down and it is perhaps debatable whether his intentions were indeed telegraphed.

Apart from not securing a bonus point, the Boks’ win was offset by the injuries to prop Trevor Nyakane and substitute scrumhalf Jaden Hendrickse who left the field on a motorised stretcher.

The frustration Nyakane showed after leaving the field suggests his immediate future is as in doubt as that of the tournament.

The Springboks are bracing for an even bigger assault from Argentina in Saturday’s Rugby Championship clash at Nelson Mandela Stadium in Gqeberha.
Sport
11 months ago

Cornal Hendricks' future with the Springboks remains on ice

Springbok coach Jacques Nienaber has confirmed that Bulls utility back Cornal Hendricks will not play in the Rugby Championship.
Sport
11 months ago

SA Rugby has expressed the desire to host the remainder of the Rugby Championship in South Africa after the cancellation of the Springboks’ scheduled ...
Sport
11 months ago

Boks’ shock and awe might not win hearts and minds, but does win games

The great rugby truism that defence wins matches and attack determines the margin has never stood this free of contradiction.
Sport
11 months ago