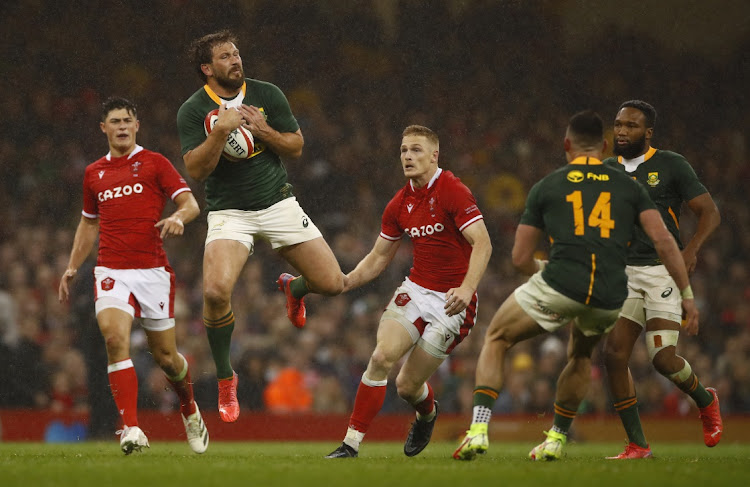 Springbok Frans Steyn delivered a commanding performance in the wet as his team beat Wales in Cardiff on Saturday.
Image: REUTERS/JASON CAIRNDUFF

Frans Steyn, man of the match in the Springboks' 23-18 win over Wales in Cardiff, took a philosophical view of his performance on Saturday.

At the age of 34, Steyn, who came on for Damian Willemse after he left the field with a head injury inside the first 20 minutes, knows he has to wrestle Father Time as much as the opposition.

“I realise this could be my last Test. I wanted to enjoy it and use the opportunities that come my way. Next week I can have a shocker again and that is how rugby works,” Steyn stated matter of factly.

After such a stellar performance the much decorated Steyn, who boasts two Rugby World Cup winners' medals, found talk of him sticking around for the 2023 edition unavoidable.

“2023 is far away and not in my planning,” said Steyn. “I'm not sure where our path will take us or what is happening at Free State (where he farms and plays his domestic rugby). There are lots of uncertainties.”

Springbok coach Jacques Nienaber paid tribute to the man of the match who helped set up the victory in the opening match of their tour of the UK which was also their first win in the principality since 2013.

Steyn made some telling contributions including a long-range penalty but most of all it was the calm demeanour he exuded in atrocious conditions that benefited those around him.

“He has more than 70 Tests,” reminded Nienaber. “When it started raining I stood with him and some of the outside backs and he explained how to catch the ball in weather like that.

“He gave some technical pointers. He's played a lot of games in this weather. That is the positive that players with experience bring. He is competitive and a team man,” explained Nienaber.

Another experienced campaigner, Jesse Kriel had a less assured day. His game time has been limited this year and his deployment on the right wing played away from his strengths.

Nienaber however sought to highlight the player's contributions over the build-up week and not the 80 minutes that matter.

“I thought Jesse was outstanding,” said the coach. “If you look at our 13, our 12 and 15 that started there is a lot that happens in week's build-up. You can see with the 49 Tests he's played there is a lot of work that he does off the field, the analysis that he does. The meetings he has with small groups. The details he goes through, the things his eyes have spotted through 49 Tests. The things that helps other players. There is the game but there are five other days where guys have to give input.”

Most pleasing for the Springboks perhaps was their ability to bring to the fore their champion qualities by shifting gears when they need to.

Their forwards gradually gained the upper hand and they shot into the lead through a Malcolm Marx maul try in the 72nd minute.

Nienaber noted its significance. “The maul try was a big thing. Up in the box we said 'this is probably the game'. Thanks to the forwards for making that one happen.

“People often talk about the contribution of the bench but forget about the poison the starters put into the legs of the opposition. They take energy, like in the mauls. The foundation was laid by the starters and then obviously the guys who come on must utilise their opportunities and kick on. That's why I always say they work in tandem.”

The Springboks' clash next weekend with Scotland at Murrayfield will not just help shape their fortunes on their end of year tour but it could also ...
Sport
6 months ago

Boks hit their Marx in Cardiff

Springbok captain Siya Kolisi has stopped well short of hanging the success or failure of their international season on what transpires on their ...
Sport
6 months ago