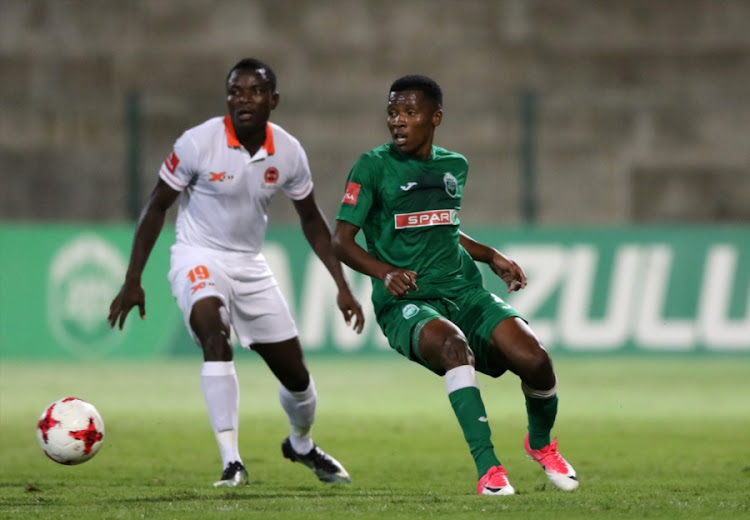 Polokwane City put their losing form behind them on Wednesday in a five-goal game at AmaZulu to move away from the relegation zone as they marked only their second win of the season.

Four defeats and a draw had threatened the tenure of Bernard Molekwa but the Polokwane City coach could not contain his smiles after the 3-2 victory at the King Zwelithini Stadium.

“We wanted the three points and the boys really fought hard to get it,”

said a delighted coach whose side stay in Durban to take on high flying Lamontville Golden Arrows in KwaMashu on Saturday afternoon.

There were four second half goals after Polokwane City had gone 1-0 ahead at half-time and a thrilling finish as AmaZulu pulled one back to ensure an exciting end but they eventually fell short.

The first half was all about set pieces and broken play.

Rhulani Manzini powered a stinging set piece from outside the box that scattered the Polokwane City wall and left goalkeeper George Chigova somewhat fortunate to get a fist onto it to clear for a corner.

But then at the other end, with only 11 minutes gone and Polokwane City having their first chance at goal with a free kick of their own, it was Ndivhuwo Ravhuhali who thrashed home an even more powerful shot, with his left foot, that struck the underside of the AmaZulu goal and clearly cross the line before bouncing out. Referee Philip Tiyani was kick to correctly to quickly award a goal.

Just past the half-hour mark, Manzini had another free kick opportunity, again with a pile driver that went through a far-from-brave wall but his time Chigova was ready and made a good diving save.

AmaZulu showed some good passing skills at time and pace in the build-up but were consistently let down by poor touches while Polokwane City continued to look for chances of their own with Rodney Ramagalela lurking ominously on the right-hand side of attack.

After the break, Manzini’s third free kick finally found the net for the equaliser with a striker better than the first two but parity lasted just a few minutes before a goalkeeping blunder by Siyabonga Mbatha allowed Walter Musona to restore the away team’s lead.

Ramagalela looked to seal up the points with a cracking shot from a tight angle in the 85th minute but Mhlengi Cele pulled one back for AmaZulu to make for an exciting ending.