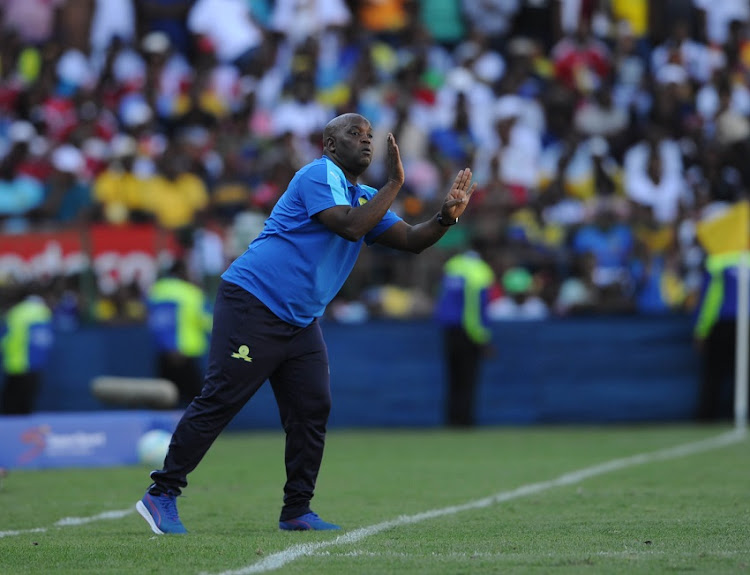 Pitso Mosimane is hoping to beat the registration deadline for the African Champions League on Monday with three more signings‚ but admits his club might have been priced out of the market by other teams.

He has‚ however‚ called on the team management to find a solution and suggested that if they wanted to continue being successful on the continental stage‚ they needed to invest in the players he needs.

Mosimane would not name his targets‚ but hinted one of those was SuperSport United striker Jeremy Brockie‚ though he remains unsure if a deal can be done.

In the wake of the 2-1 league victory at Ajax Cape Town on Tuesday that opened up a four-point lead at the top of the table‚ the Sundowns coach also suggested there would be departures from the team this month.

“We have a small squad‚ everybody knows Sundowns as having big numbers‚ but we don’t.

"We have 24 players and that is why everybody has to play … there is no player that has not played‚” Mosimane said.

“As much as we are fighting to try and win the Premiership‚ we are also in a preparation period for the Champions League that starts in six weeks’ time.

"So we have a different programme [to other clubs] that is complex and we will start again having those games in hand [to fulfill].”

Khama Billiat also seems likely to head for the exit.

“Our objectives are different‚ that is why this [January transfer window] is the time to sign players for us‚ not in June.

"That is why we brought Aubrey to come in now and we have to bring in three more.

“If we have a squad of 24 again‚ I am happy‚ and that means obviously some of the players will have to leave now.

"But you can’t let the players go if you don’t have those who you wish should come in.”

Mosimane suggested those players he is eyeing before Monday are long-established targets‚ including Brockie‚ who handed in a transfer request in the last window to try and force a move to Sundowns that was turned down by SuperSport.

“We sign [players] a year before‚ the players we wanted‚ we wanted them last year‚ and you know… [who they are].”

Pressed on whether he thought he could push through the deals over the weekend‚ Mosimane was cautious.

“We are rushing … but it is going to be difficult‚” he said.

“You know when Sundowns have to buy‚ the price is different‚ hey? That is what we are fighting.

“Ajax can tell you about the good cheques they got from us for Khama [Billiat]‚ Keagan [Dolly] and Rivaldo [Coetzee].”

But he also appeared to send a message to the club hierarchy that they must stump up the cash if they want to continue to be successful.

“Sometimes you complain it is expensive‚ but once you go to the group stages of the Champions League‚ it is a totally different game.”

Pitso Mosimane is hoping to beat the registration deadline for the African Champions League on Monday with three more signings‚ but admits his club ...
Sport
4 years ago

Polokwane City coach Bernard Molekwa will be aiming to build on their unbeaten run of three matches when his charges play three crucial away ...
Sport
4 years ago

Luc Eymael’s reputation in the Absa Premiership continues to soar‚ as now he has transformed Free State Stars from relegation battlers into top half ...
Sport
4 years ago

Mamelodi Sundowns have opened up a four-point lead at the top of the Premier Soccer League standings after they came from behind to beat ...
Sport
4 years ago