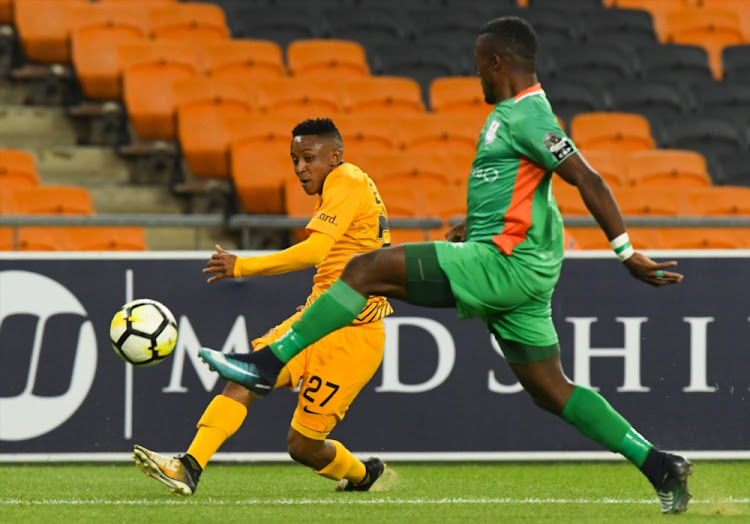 Hendrick Ekstein of Kaizer Chiefs on the attack during the CAF Confederation Cup match against Zesco United at FNB Stadium on January 19, 2019 in Johannesburg, South Africa.
Image: Sydney Seshibedi/Gallo Images

Kaizer Chiefs coach Ernst Middendorp could not give a satisfactory response for why he switched from a 3-5-2 formation to a 4-4-1-1 in his team's 2-1 home leg Caf Confederation Cup playoff round defeat against Zesco United on Saturday night.

Middendorp's switch raised eyebrows as Chiefs‚ instead of fighting to reduce a 3-1 away leg deficit‚ weakly capitulated to a 5-2 aggregate defeat in the round before the group stage.

The 3-5-2 with wingbacks flying forward that the coach has employed in all Amakhosi's games this year has yielded goals.

And goals were what Chiefs needed on Saturday night.

Instead‚ with Daniel Cardoso fielded at right-back‚ limiting attacking options‚ Chiefs appeared disorientated in a new system against Zesco.

Middendorp effectively blamed predecessor Giovanni Solinas‚ who he replaced as head coach on December 7‚ for not having registered fullback Kgotso Moleko for the Confed.

However‚ Ugandan Godfrey Walusimbi‚ who the coach has employed successfully as a right wingback‚ is registered‚ and was on Amakhosi's bench on Saturday.

"It's a little bit‚ to look into it‚ I always miss one wingback‚" Middendorp said.

"Or let's take it from this side - Moleko can play in the league but he's not registered in the Confed.

"By the way‚ I have nothing to do with that. He is not registered - that is what I can say.

"Other players are not registered too. I have them playing in the PSL.

"We are always looking into it. And one area we have been looking at since December 7 - not before - is being flexible in positional changes.

Kaizer Chiefs playing intensive games in midweek ahead of both legs of their Caf Confederation Cup playoff round tie against Zesco United played a ...
Sport
2 years ago

"I think that's normal‚ to use some ideas and bring it in.

"Of course‚ we worked with what we had - we had certain patterns. And again‚ with 10 minutes played you are 1-0 down - what are you talking‚ what are you saying?

"What's going on? You play the cards in the wrong direction."

Chiefs were in no way helped by Hendrick Ekstein's defensive error that led to Teddy Akuma's 10th-minute opener‚ which changed the complexion from Amakhosi needing a 2-0 scoreline to win the tie‚ to three goals to take it to penalties.

But Middendorp's response to his reasoning for the formation change‚ and another that Chiefs suffered from having to play two intense away midweek league victories - 2-0 against Bidvest Wits and 3-2 against AmaZulu - ahead of both weekend legs against Zesco‚ appears to raise some suspicions.

A formation change for no apparent‚ clear reason that could be explained by the coach‚ and basic admission that Amakhosi never really had the fight to lift themselves for a tough schedule‚ hints‚ reading between the lines‚ that once again the Soweto giants did not really want to progress into a financially costly and physically taxing continental group phase.

Kaizer Chiefs' players talked big during the week about putting up a fight to reduce the two-goal deficit from their 3-1 first-leg defeat against ...
Sport
2 years ago