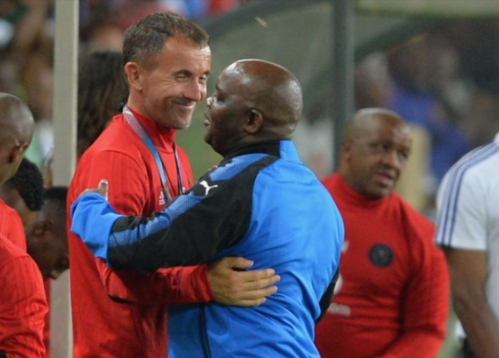 Orlando Pirates coach Milutin Sredojevic was quick and gracious after the Bucs' 3-0 victory against Polokwane City on Saturday‚ falling just short as Absa Premiership runners-up for a second season‚ to congratulate Mamelodi Sundowns on defending their title.

Bucs held up their part sweeping aside fifth-placed Polokwane at Orlando Stadium. But Sundowns held their nerve for a 1-0 victory‚ relegating Free State Stars to the National First Division‚ at Goble Park in Bethlehem.

Pitso Mosimane joined Gordon Igesund‚ Gavin Hunt and Ted Dumitru on four league titles in the Premier Soccer League era - all his championships coming at Sundowns - as the Brazilians ended on 59 points‚ Pirates on 57.

"I would like to use the opportunity as a sportsman‚ as a coach‚ as an opponent‚ to express sincere congratulations to coach Pitso and his technical team‚ to their management‚ to their supporters‚" Sredojevic said.

"To my boy Denis Onyango [Sredojevic coached Downs goalkeeper Onyango with Uganda] who has this season been a factor.

"Hlompho Kekana as a captain‚ and all the players - congratulations upon collecting 59 points. It was not accessible to us. Congratulations."