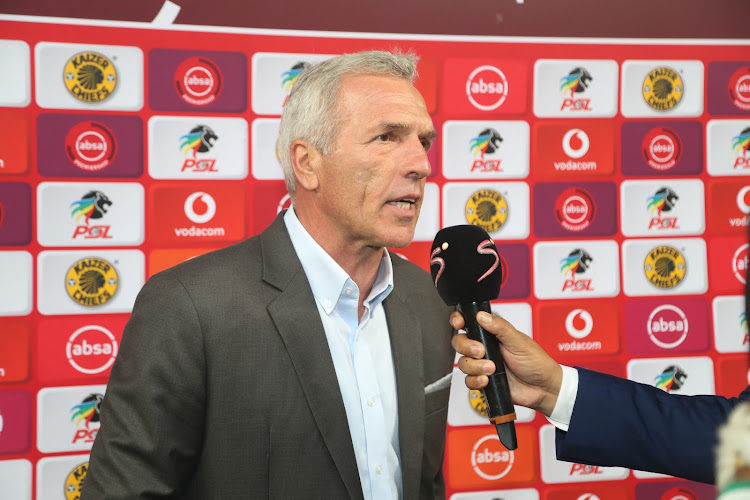 Ernst Middendorp slammed his players for their “huge attitude issue” conceding three goals in the first half‚ but praised Kaizer Chiefs for their hugely improved controlled aggression owning the second 45 minutes in their thrilling 5-3 win against Bloemfontein Celtic on Saturday night.

Chiefs went to the break at Moses Mabhida Stadium 3-2 down‚ their defensive shape at times shocking‚ and a brace from striker Samir Nurkovic keeping the Absa Premiership leaders in the game.

After the break a brace from Leonardo Castro and Nurkovic completing his hat-trick came from Amakhosi controlling the play imperiously in the second half.

He said: “And we missed this [in the first half]. Of course you try to find some words‚ try to find a way to communicate to the players. And that is what we have done.”

Middendorp‚ for some reason‚ did not allude in the post-match press conference to what he said in his TV interview‚ which was that he had some words with his players about their “attitude issue” at the break.

The coach had felt his league leaders – on the back of their run of success – came into the game slacking in application in the first half.

“The first half I think we had a huge attitude issue. We were not really in the game. We didn’t move like it should be to get to this position we are in at the moment [as league leaders]‚” Middendorp had told SuperSport.

“It was much better in the second half. I think in the end we fully deserved three points.

“And it’s nothing to blame. It’s not the quality. It’s just the attitude.

“Where we are sitting now and we think we can do less. We cannot. We have to fight every team now.

“If you go into a game and want to do a bit of a prima donna‚ there is no chance to win a game in this league.”

Asked how he changed it at the break‚ Middendorp said: “Believe me I have my way to talk to the team about it.

“Ja‚ I think obviously it was necessary today. I trust them. They have a lot of quality. And everybody in the squad has a fantastic attitude. And thank God we were able to correct it.”

Chiefs’ eighth league victory in succession saw them maintain their 10-point lead in the PSL after 13 matches.

Amakhosi’s final game before the Christmas break is against Maritzburg United at Harry Gwala Stadium on Sunday‚ December 22.