‘A well-rested team’: 10 Pitso Mosimane quotable quotes that will make you cry 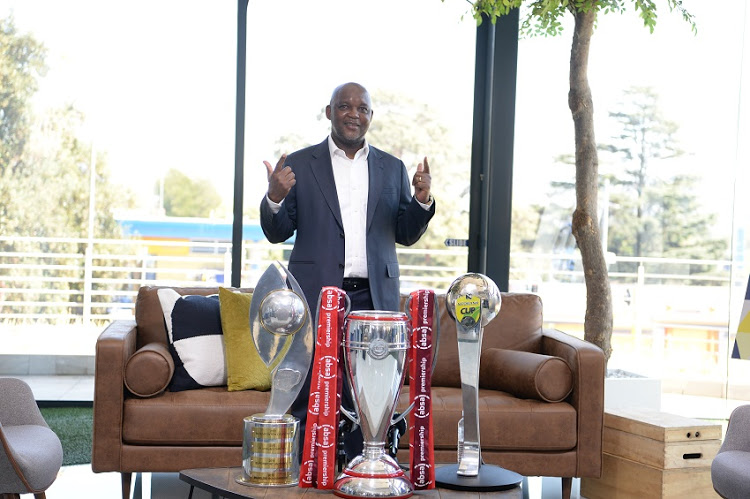 Pitso Mosimane parades the three trophies he won with Mamelodi Sundowns during the past season.
Image: Lefty Shivambu/Gallo Images

Former Mamelodi Sundowns coach Pitso Mosimane is not just one of the most decorated coaches on the continent‚ but he is also a colourful provider of fiery‚ controversial and quotable quotes.

Over the past seasons‚ the incoming Al Ahly coach has dished out verbal assaults at opposition coaches and clubs to control the narrative with mind games and it often worked to his advantage.

Here are 10 of Mosimane’s outrageous and memorable quotes during his highly successful time at Chloorkop.

1. Mosimane uses mind games ahead of a league match against Kaizer Chiefs in October‚ claiming that Amakhosi had been “benefiting” from poor officiating

“They are currently on good form and they are benefiting. They are enjoying the ride at the moment‚ we just have to do what we have to do and we pray that the contributors don’t help them to benefit.

“… Benni [McCarthy] was crying‚ I am busy crying‚ AmaZulu was complaining‚ Steve Komphela was complaining and even Owen Da Gama is complaining. Who doesn’t complain? They are having a jolly ride on top of the log.”

2. Mosimane stepped up mind games with Chiefs once again calling them a “well rested team” and favourites to win the league

“I call them a well-rested team. They should be able to compete for the league because they are playing on Saturday and then again the next Saturday. They have the energy and time to fix their problems at training.

“Sorry‚ we [Sundowns] have to play every three days‚ but they [Chiefs] are the favourites for me and that is what I said about Bidvest Wits last year because they also didn’t have anything to do [outside the league]‚” said Mosimane about Chiefs in October 2019.

3. Mosimane speaking in October last year where he took a swipe at Chiefs coach Ernst Middendorp

“You must remember that when Ernst Middendorp left SA‚ he was always in the DC every day where he was saying the PSL is against him and all those things.

"He was always complaining about referees‚ he went to Thailand on a honeymoon and came back and now he is benefiting.

"Why should we not talk about‚ this is a championship battle and everyone wants to win it. Klopp talks and I will continue to talk.”

4. During the season‚ Mosimane launched endless verbal attacks on Chiefs and here he once said they have no excuse but to win the league because they played less matches

“They [Chiefs] have no excuse. It’s like we are at school‚ I am doing 10 modules and you are doing three or four. At the end of the year you must pass because you did less modules than me.

“And remember you have to pass and with distinctions because I am doing 10 modules and the amount of time in studying is not the same.

"Guys‚ you have to pass and there is no excuse. The league is in their hands and they must win it‚ you can’t fail to do it.”

“Chiefs are not playing‚ they wait for you‚ they have seven to eight days of rest‚ I mean really.

"They are fresh‚ it’s easy for them to deal with Maritzburg United at the weekend but let’s go to Caf and put more games.

"Wits put six games during the early stages of the Confederation Cup and they put six more during the group stages‚ that’s 12 more games to their schedule than their competitor who is sitting on top.

“We put 12 in the Caf Champions League so far. We played in two MTN8 semi-finals‚ we went all the way in the Telkom Cup (and won it) and the competitor did not even do the MTN8.

"They are fresh‚ they are strong and they have to win the league.”

6. Sundowns had a busy schedule because of the Caf Champions League and in December Mosimane said they deserve a break to braai with their families

“Aren’t you guys tired of us‚ I mean we were just here yesterday. No man‚ we should go for a break or holidays.

"I just passed there at Riverside Park‚ people are braaing on the beach – can we also go?”

7. Mosimane was never afraid of speaking his mind about the performances of referees and in January this year he blasted referee Abongile Tom for being an amateur after a draw with Bidvest Wits

“If I have Victor Gomes on the line or other people‚ I speak to them and they talk but these ones they are magogorwane [amateurs] my bra.

"They shout ‘no‚no‚no‚ stay back’ when you have just crossed the line once.

"He [Tom] is like a school principal with a whip‚ he comes shouting ‘you are crossing the line‚ go back.’ I mean really what are we gonna do with that?”

8. A few months later‚ Tom was again on the receiving end of some scathing criticism from Mosimane for the way he handled the match between Sundowns and Polokwane City

“He is a young referee.

"He needs to get games like this to improve.

"There were a little bit of fouls that he gave in the first half more on Polokwane City because the game was congested in the midfield with Jabu [Maluleke] playing on tight angles‚ one-twos‚ sometimes he falls and they got fouls there.

"If it’s Champions league it's a totally different game.

“Like [Victor] Hlongwane‚ you know that he lets the smaller things go‚ he lets the game go‚ but this one [Abongile Tom] is whistle-happy... tswiri tswiri every minute.

"I mean really. I don’t say it’s not fouls but he loves the whistle.”

9. Though he continuously complained that Chiefs “benefited”‚ in December Mosimane welcomed his luck as a mistake from Kulasande Qongqo contributed to Sundowns’ crucial 3-1 win over Stellenbosch FC

“If I benefited you can minus and stay at 2-1‚ it’s up to you. If we benefited why not‚ it’s about time.

"I even want an offside or penalty on Saturday [in the Telkom Knockout final against Maritzburg United in Durban].

"I will lift the trophy gladly. It is the way it is at this point and I will take it.”

10. Mosimane after Chiefs attacker‚ and his former player‚ Khama Billiat won man-of-the-match award against Sundowns on the opening weekend of the season

“I thought it was the voting again – you know‚ Chiefs has many supporters.

"So when you vote they will out-vote everybody.

"I thought it was this SMS again‚ like the Shell Cup. I saw people voting for man-of-the-match. I mean really. But it’s okay‚ I respect.”

Pitso Mosimane has resigned from Mamelodi Sundowns reportedly to take up a job with one of the top clubs in north Africa.
Sport
11 months ago

Mamelodi Sundowns president Patrice Motsepe has accepted the resignation of outgoing coach Pitso Mosimane‚ who is reported to be joining Egyptian ...
Sport
11 months ago

Pitso Mosimane has released a statement confirming his resignation from Mamelodi Sundowns to "join an international club".
Sport
11 months ago

Former Mamelodi Sundowns midfield star Bennett Mnguni has said that the resignation of coach Pitso Mosimane is a huge blow to the club.
Sport
11 months ago