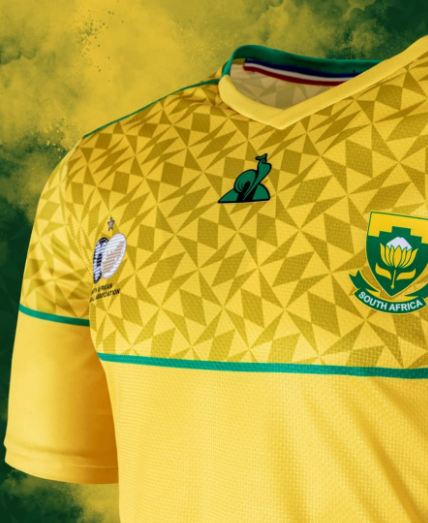 A spanking new Bafana Bafana kit will be unveiled for the first time to the public on Monday ahead of the national team's two international friendlies to be played in Rustenburg in the coming days.

TimesLIVE has learned that French manufacturers Le Coq Sportif will be unveiled as Bafana’s new kit sponsors at Safa House with some of national team players lined up to model the apparel in front of the cameras.

The new sponsors have signed a five-year deal with the South African Football Association and they have replaced Nike‚ the US company that backed the national teams for the past five years.

“We have made no exception with regards to the quality and standard of the new kit as we take pride in the men and women who represent the country on the field‚” said Roger Noades‚ sales director at Le Coq Sportif.

Bafana return to the field for the first time this year when they host neighbours Namibia on Thursday and Zambia on Sunday at the Royal Bafokeng Sports Palace.

The national team's 2021 Africa Cup of Nations (Afcon) and 2022 Fifa World Cup qualification programme was halted in March due to the outbreak of Covid 19 and coach Molefi Ntseki is chomping at the bit to return to the field.

SA's last match was in November last year‚ a 1-0 home win against Sudan in an Afcon qualifier.

The South Africans will continue with their Afcon qualification on November 9-17 with back-to-back matches against the island team from Sao Tome & Principe.

The 2022 World Cup qualifiers will kick off in May and end in November next year. Bafana will face Ghana‚ Zimbabwe and Ethiopia in Group G.

Throughout his almost eight years of his time at Mamelodi Sundowns‚ former coach Pitso Mosimane signed some of the best players seen in the Premier ...
Sport
1 year ago

Pitso Mosimane has admitted the timing of the approach from Al Ahly to join the Egyptian giants caught him off guard since Swiss incumbent Rene ...
Sport
1 year ago

Premier Soccer League (PSL) chairman Irvin Khoza insists there is no prejudice to the SA Broadcasting Corporation (SABC) and its right to televise ...
Sport
1 year ago