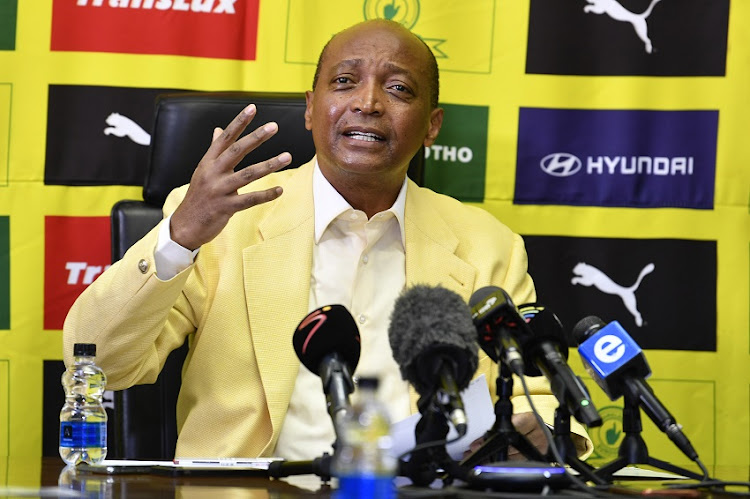 Mamelodi Sundowns President Patrice Motsepe.
Image: Lefty Shivambu/Gallo Images
Patrice Motsepe’s bid to become the next president of the Confederation of African Football (Caf) is gaining momentum‚ but the mining magnate has preferred to do most of the wheeling and dealing behind the scenes.
The Mamelodi Sundowns owner’s bid has largely been muted, and there were fears that he was too silent as the March 2021 election date edges closer with each passing day.

But SA Football Association (Safa) president Danny Jordaan allayed those fears on Wednesday and revealed a lot was happening‚ even though most of the deal-making was not taking place in the public domain. The Safa president is an experienced hand on continental matters, and he is helping Motsepe with the lobbying on the muddy terrain of African football.

“Now we only have four candidates, and on the 12th of January Fifa and Caf will submit the final list of candidates who have passed the integrity test. He [Motsepe] said look‚ I want to know who I am up against and who has gone through the integrity test so that I know.

“But what has he done in the meantime‚ he has gone to Egypt twice‚ last Thursday he met with the executive of Caf and he has been to other North African countries. We had 14 presidents present at the Sundowns 50th year anniversary celebrations last weekend here [in SA] and we had other 18 presidents submitting apologies.”
Former Caf president Ahmad was banned by world football governing body Fifa for five years for financial misconduct last month.

South African Football Association (Safa) president Danny Jordaan has confirmed that Mamelodi Sundowns boss Patrice Motsepe will launch a bid for the ...
Sport
1 year ago
Fifa said in a statement that the investigation covered Ahmad’s conduct in his position as Caf president during the period from 2017 to 2019.
But even in his absence‚ Motsepe is still up against tough opposition and has to contend with Jacques Anouma of the Ivory Coast Football Federation‚ Senegal FA president Augustin Senghor and the head of the Mauritanian federation‚ Ahmed Yahya.

Jordaan said the travel restrictions necessitated by Covid-19 had also hampered free movement on the continent and in other parts of the globe.

“You must remember that it is very difficult to travel now. Before you travel you must have a test and every 72 hours you must have another one‚" he said.
“I am now on my ninth test, and we are going to Qatar for my 10th test there and this becomes very complicated.
“But‚ we saw the presidents there at the 50th anniversary celebrations and virtually every Southern African president was there with the exception of Mauritius and Seychelles because there are no flights there.

“[On Thursday] he is flying to Qatar because there is the Asian Champions League final there‚ and then he is going to at least three other African countries. He has been doing the rounds.

“Of the 14 presidents that attended the 50th anniversary celebrations‚ ten of them came from the Cosafa region and others made apologies.

“We also had presidents from Guinea Bissau‚ Benin‚ Equatorial Guinea‚ Nigeria and Burundi here. He is going to African countries directly and I think he is the only candidate that is actually going to each of the 52 African countries because he has the ability to go there and he is doing that.”