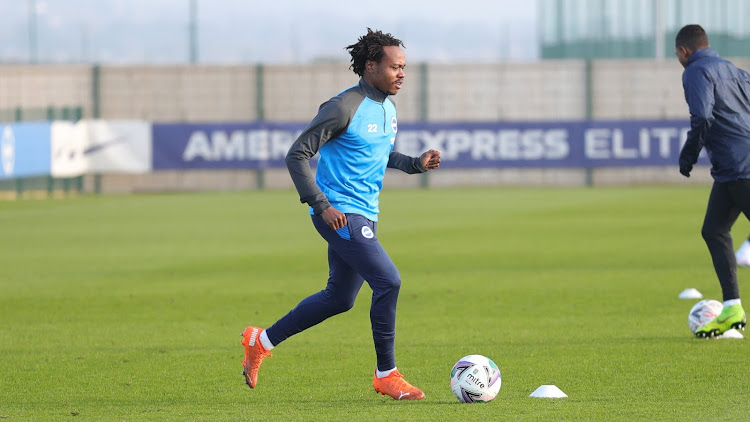 Brighton and Hove Albion have given an indication why Percy Tau has been recalled from the third of his loan spells‚ with the Premier League club publishing a glowing technical scouting report on the player’s ability on their website.

With the club struggling in 17th place in the 20 team EPL‚ Brighton have been looking to bolster manager Graham Potter’s squad‚ including assessing their players put out on loan.

A technical report on Tau rates him higher than Albion’s existing players in the squad on many fronts‚ indicating the club view Tau as bringing a new dimension to their attack‚ and showing why Potter has suggested the player might get a debut as soon as Sunday’s FA Cup third-round tie against Newport.

The scouting report makes for interesting reading in full.

It states: “Albion fans will finally get the chance to see SA striker Percy Tau in action after the forward was recalled from his loan spell at Anderlecht.

“Tau has appeared 79 times in the last two-and-a-half seasons and been directly involved in 43 goals (21 goals‚ 22 assists). On average he has recorded a goal involvement every 130 minutes. Those appearances came at Union Saint-Gilloise‚ Club Brugge and Anderlecht.

“His international goal-scoring record is just as deadly as his domestic one. Twelve goals in 25 SA games ranks Tau fifth in the all-time scoring charts for his country with his 168 minutes average per goal scored the third best of any inside in the top 10.

“The forward showed the variety in his finish library in the last international break‚ netting three times in two games against Sao Tome: one penalty‚ one goal following a dribble and one goal from outside the box following a run in behind to meet a through ball.

“Tau joins Andi Zeqiri as a left-footer in Brighton’s forward line‚ and the South African seems equally adept in creating chances as he is at converting them with 31 chances created and 30 shots taken in marginally more than 1‚000 league minutes this season. He averages 2.2 chances created and 2.3 shots per 90 minutes played.

“Tau leads all Anderlecht players on the creative front‚ with only Lukas Nmecha bettering him as a shooter and goal-scorer this season.

“Testament to his technical proficiency is Tau’s completion of 20 of the 24 long passes he has attempted this campaign. The 26-year-old has attempted 32 dribbles and 19 crosses‚ while he ranks top at Anderlecht for both tackles attempted (35) and won (25).

“His tackle completion rate of 71% eclipses any player at Albion so far this season‚ his defensive capabilities underpinned by a small stature which has resulted in an immense repeated sprint ability.

“By the end of last October Tau had run over 1.3km at speeds over 20km/h‚ ranking him inside the top 10 in Belgium’s top tier. Per 90 minutes this season he averages 2.5 accelerations‚ with Neal Maupay Albion’s closest current challenger with 1.1.

“For Brugge in the Champions League last season‚ Tau pressed opponents on 159 occasions (34 successful) in less than four full matches worth of minutes – he averaged a press every 82 seconds.

“Though that sample size is incredibly small‚ it shows the intensity at which Tau can operate‚ even at the highest level.

“Compared to Brighton forwards (Maupay‚ Connolly‚ Welbeck) so far this season‚ Tau sits third for Expected Goals per game (0.35) but is the best for actual goals scored per 90 minutes (0.47); such statistical over-performance would suggest the 26-year-old is more than capable of being clinical in front of goal.

👓 Tau has appeared 79 times in the last two and a half seasons and been directly involved in 43 goals (21 goals, 22 assists).

On average he has recorded a goal involvement every 130 minutes.@AlbionAnalytics talks us through the key numbers on @percymuzitau22. 👇#BHAFC 🔵⚪️

“In addition‚ Tau has recorded a total of 3.5 Expected Assists and averages 2.4 passes per game into the penalty area‚ numbers which again show just how capable he is of creating for others as well as himself.

“Of the Albion forwards‚ only Aaron Connolly (2.4) receives more long passes per game this season than Tau (1.5).

“Such attacking nous allows the forward to fulfil multiple roles in the forward line. He is capable of playing on either flank and through the middle‚ both as the most advanced striker and also in deeper positions.”

With such a glowing appraisal encapsulating Tau’s Energiser bunny-like presence on a football field‚ Brighton fans will be expecting much from the South African at Falmer Stadium as Albion aim to preserve their top-flight status in their fourth season back in the EPL.

'The Lion of Judah has arrived!' - Fans excited at Percy Tau's recall to the English Premier League

In a huge development in the career of Percy Tau, Brighton and Hove Albion have recalled the Bafana Bafana forward from loan at Belgian club ...
Sport
1 year ago