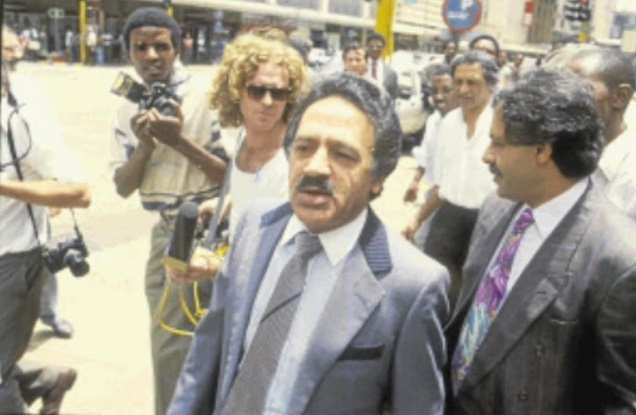 Abdul Bhamjee was more than a PRO to the National Soccer League (NSL)‚ which formed from 1985‚ and was also a driver of its marketing and financial success‚ South African Football Association (Safa) president Danny Jordaan has said.

Jordaan said Bhamjee was also a strong voice for a single South African football league and governing body in the fractured 1980s.

The NSL‚ breaking away from the National Professional Soccer League (NPSL)‚ which was formed in 1970‚ set new standards in marketing and capitalised on sponsorship and TV broadcast rights.

It set a platform for today’s even more lucrative and professional Premier Soccer League (PSL)‚ which was formed in 1996.

Bhamjee‚ who died aged 83 in Johannesburg on Monday night‚ as the exuberant PRO of the NSL was‚ Jordaan said‚ “the face of the organisation”.

“Abdul Bhamjee was one of the flamboyant characters in South African football‚” Jordaan said on Tuesday.

“He made the position of PRO almost the head of marketing in the organisation. He really drove that process. If he went to a BP [Top 8] final he would be dressed in green pants and a yellow jacket‚ always aligning himself in his dress with the sponsor.”

The South African Football Association extends its deepest condolences to the friends and family of former football administrator Abdul Bhamjee. May your soul rest in eternal peace. We thank you for your contribution to football. pic.twitter.com/GtDkfUe2vH

Bhamjee was among the football leaders who led the breakaway from the NPSL‚ run under the iron grip of George Thabe and auspices of the all-black SA National Football Association (Sanfa)‚ to form the NSL.

While multiracial football began in 1976‚ defying apartheid laws‚ the administration of the sport remained splintered and at odds with each other among racial ruling bodies. The NSL aimed for a single multiracial league and governing body run under new standards of marketing and professionalism.

“I [have] known Abdul Bhamjee for a long time because he came from the SA Sports Federation [coloured and Indian SASF]‚ and then he was suspended there‚” Jordaan said.

“They broke away from the NPSL‚ which was the first professional league of Sanfa‚ and formed the National Soccer League‚ the NSL. And the NSL formed the governing body Sasa‚ the Soccer Association of South Africa.

The PSL is mourning the passing of former Public Relations Officer of the NSL, Mr. Abdulhuck Bhamjee

The PSL Executive Committee and member clubs are saddened by the loss of Mr Bhamjee. We recognize his role in the formation of the NSL and the building of the brand NSL pic.twitter.com/1PTdBhy9ac

“In the late 1980s‚ after the second state of emergency it was clear that apartheid was coming to an end‚ and in 1987 the ANC in exile gave the instruction that the end is near and there must be an end of these racially-separated bodies‚ and we should form one single body.

“And the most divided sport in the country was football‚ because it had four national bodies – [the white Fasa; Sanfa‚ SASF and breakaway Sasa]‚ and each had its own league.

“Bhamjee then was part of the NSL‚ and he was uncompromising that there must be one football league and a single governing body.”

Jordaan said each president of the four racial associations vied for the interim chairmanship of newly-formed Safa when it was formed in 1991‚ to negotiate with the Confederation of African Football (Caf) for South Africa’s readmission.

Mluleki George‚ then head of the National Sports Congress‚ was appointed for the first year. This coincided with Bhamjee falling out of influence in SA football when he was charged in 1991‚ and later convicted‚ for the disappearance of R6.5m from NSL coffers. Bhamjee always argued his innocence‚ saying the amount was a commission from the NSL he never received in writing.

The PSL will observe a moment of silence ahead of this week’s DStv Premiership and GladAfrica Championship fixtures commencing today until the weekend.

May his soul repose peacefully.

George‚ later vice-president of the South African Rugby Football Union (Sarfu) and Deputy Minister of Defence‚ died as a result of contracting Covid-19 on January 5.

The first CEO of the PSL‚ of which the NSL was the precursor‚ Trevor Phillips‚ like Bhamjee a marketing guru who took the sport professionally to new financial heights‚ died on January 11.

Jordaan said to have three such influential figures in SA football history die within two weeks of each other was notable.

“I think professional football was built on the backs of people like Abdul Bhamjee‚ Cyril Kobus and Trevor Phillips‚” he said.

An important part of Bhamjee’s legacy was that he was the driving force behind the construction of FNB Stadium‚ football’s first venue it owned‚ from 1986 to 1989. The 78‚000-seat venue was rebuilt into its 95‚000-capacity current incarnation as the venue for the 2010 Fifa World Cup opening game and final.

“At that time football had no stadium in this country‚ but rugby had Ellis Park‚ Loftus‚ Newlands‚ all these stadiums‚” Jordaan said.

“Bhamjee said‚ ‘No‚ football must have a stadium’. So he went to FNB‚ where Chris Ball was the MD‚ and took a loan to build that stadium.”

Our condolences go out to the children (Mohamed, Fazel, Yusuf and Nadira) and the entire Bhamjee family.

We supplicate that God gives them fortitude at this moment of their extreme grief and pain.

When SA football fans reminisce on the glorious football and packed stadiums of the 1980s‚ the hype and excitement brought to the game by Bhamjee is often mentioned.

“The PRO was a guy who was on the field‚ who would run around the stadium – Chiefs’ Louis Tshakoane‚ and later Putco Mafani‚ and ‘Goldfinger’ [Alex Shakoane] from Sundowns all used the Bhamjee template to shake up the crowds‚” Jordaan said.

“But in meetings he was very strong‚ he was decisive‚ he was clear [that]‚ ‘You must have one single professional league and one single governing body’. And in driving that process he was a very strong ally to those of us seeking unity in the sport.”

The PSL announced it will hold “a moment of silence ahead of this week’s DStv Premiership and GladAfrica Championship fixtures”.

The league said in a statement: “The PSL Executive Committee and member clubs are saddened by the loss of Mr Bhamjee. We recognise his role in the formation of the National Soccer League and the building of the brand NSL.”

Bhamjee was buried at Westpark Cemetery in Montgomery Park‚ Johannesburg, on Tuesday morning.

"I wish I was an Orlando Pirates player - no win, no stress, just dancing waya waya."
Sport
1 year ago

Champions Mamelodi Sundowns have a squad that is the envy of most coaches in the league but mentor Manqoba Mngqithi does not want to be drawn into ...
Sport
1 year ago

Bloemfontein Celtic have not won a match in five outings but Mamelodi Sundowns coach Manqoba Mngqithi is treading very carefully ahead of the league ...
Sport
1 year ago

Dylan Kerr believes that his struggling Black Leopards charges can be untouchable if they stick to instructions and play the way they did in the 2-0 ...
Sport
1 year ago