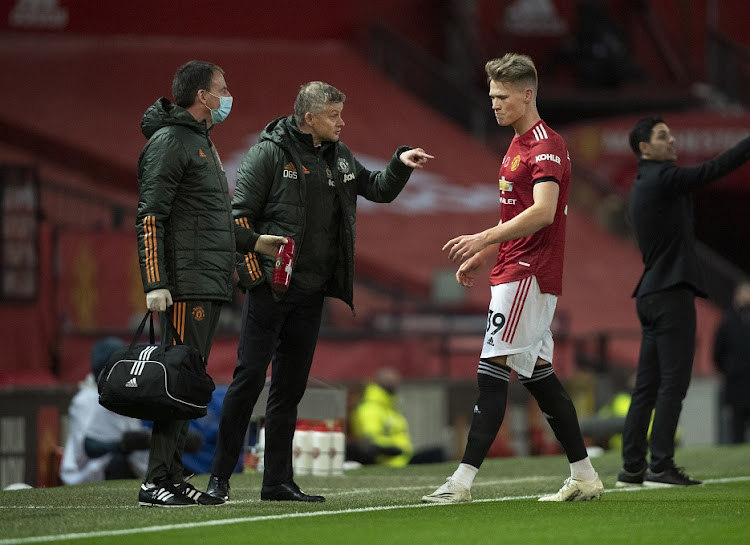 Manchester United manager Ole Gunnar Solskjaer said his side cannot be considered title contenders after they twice blew a lead to draw 3-3 with Everton at Old Trafford on Saturday.

Goals from Edinson Cavani and Bruno Fernandes put United ahead but sloppy defending allowed the visitors to get back on level terms through Abdoulaye Doucoure and James Rodriguez.

Scott McTominay fired Solskjaer's side into the lead in the 70th minute but they were stunned in stoppage time as Everton snatched a draw with the last kick of the game from Dominic Calvert-Lewin.

A win would have taken United level on points with leaders Manchester City, who have two games in hand and visit champions Liverpool later on Sunday.

"We shouldn't even be considered as title-chasers," Solskjaer told Sky Sports.

"We've got to be better as a team and let's see where we end up. Going forward, we need to stop conceding easy goals.

"When it's in the last minute of added time it's very disappointing. I wouldn't blame anyone on the goals but we know we can defend better."

Bafana Bafana coach Molefi Ntseki and his technical team have unveiled their elaborate plans for the must-win and back-to-back 2021 Africa Cup of ...
Sport
10 months ago

Lehlohonolo Majoro pulled AmaZulu FC from the jaws of defeat to help them boot their neighbours Lamontville Golden Arrows out of the Nedbank Cup‚ ...
Sport
10 months ago

Bayern Munich on Saturday were left fuming after a seven-hour delay to their departure to Qatar for the Club World Cup, when Berlin's airport refused ...
Sport
10 months ago

Al Ahly will aim to “have fun” against Bayern Munich in their Fifa Club World Cup semifinal on Monday‚ said Red Devils coach Pitso Mosimane‚ who ...
Sport
10 months ago

Lamontville Golden Arrows coach Mandla Ncikazi has acknowledged that the AmaZulu team they’ll be meeting in the last-32 of the Nedbank Cup on ...
Sport
10 months ago

AmaZulu FC are set to release a number of fringe players before the end of the current window‚ but the club’s coach Benni McCarthy declined to ...
Sport
10 months ago