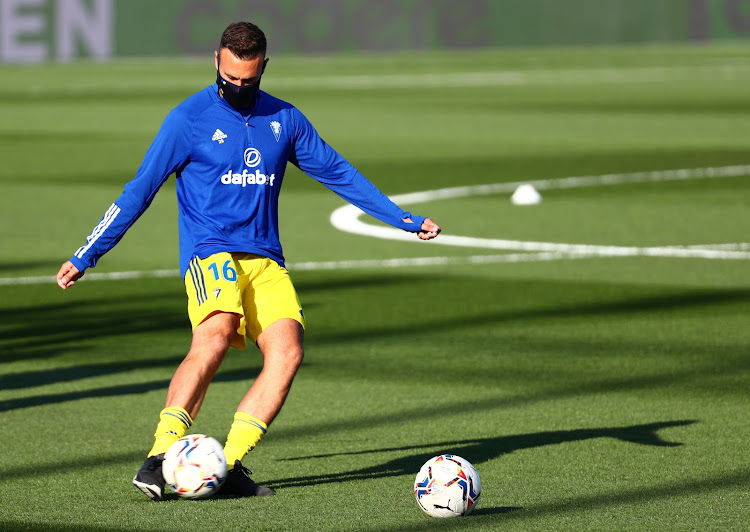 Cadiz defender Juan Cala denied racially abusing Valencia's Mouctar Diakhaby during Sunday's 2-1 win in La Liga, saying he had been caught up in "a media circus" and "a public lynching".

In a first in Spanish football, Valencia's players left the pitch after Diakhaby reacted furiously following an altercation with Cala in the first half.

Diakhaby told the referee he had been racially abused.

Valencia eventually returned to the pitch and resumed the game, saying the referee had warned them that they could face a sanction otherwise.

Diakhaby asked to be substituted but gave his blessing to the team to return.

The French defender spoke for the first time about the incident in a video posted on his official Twitter account on Tuesday, saying he had been "very hurt" and hoped La Liga would sanction Cala.

But Cala, speaking at a news conference, repeated that he had not racially abused Diakhaby and had only said "leave me in peace" following a dispute for the ball.

"What has happened is a media circus, a public lynching," Cala told a virtual news conference.

"The best thing would have been to get me and (Diakhaby) together in a room to explain what happened. Instead, it's been a circus. I was judged before the game was over."

Cala, 31, also lamented being assumed guilty of the insult without any audio proof.

"There are 20 or 25 cameras around, who knows how many microphones, and no-one heard (the insult).

"So at the very least let me have some doubt about what happened," he said.

Diakhaby said a Cadiz player had suggested the Valencia players could resume play if Cala apologised to him.

"Me and my teammates said 'No, it doesn't work like that, you can't just say something like that, apologise and move on'."

"I hope the league impose sanctions," he added.

Cala said he would "quit football tomorrow" if a team mate confirmed he had offered to apologise.

"Cala has missed a great opportunity to accept his mistake and apologise," Valencia said in a statement on their website.

"Valencia CF wish to reiterate that we believe our player and back him completely."

Siphelele Ntshangase’s agent‚ Jazzman Mahlakgane‚ says there is interest from clubs in signing the talented playmaker, who was released by Kaizer ...
Sport
1 week ago

Kaizer Chiefs coach Gavin Hunt was reluctant to comment on Wydad Casablanca’s poor amateur theatrics and gamesmanship both away and on Saturday ...
Sport
1 week ago

Lamontville Golden Arrows coach Mandla Ncikazi has committed himself to improving the team’s retention of the ball and creating chances after his ...
Sport
1 week ago

Swallows FC again stole a point in the final minutes of a premiership match and coach Brandon Truter admitted that the run of last-gasp results is ...
Sport
1 week ago

Valencia were told by organisers to resume playing Sunday’s La Liga match at Cadiz or they would have to forfeit the points after they had left the ...
Sport
1 week ago
Next Article