Pitso Mosimane not interested in the Bafana coaching job: "I asked him‚ and he said‚ ‘Nope‚ I won’t’" 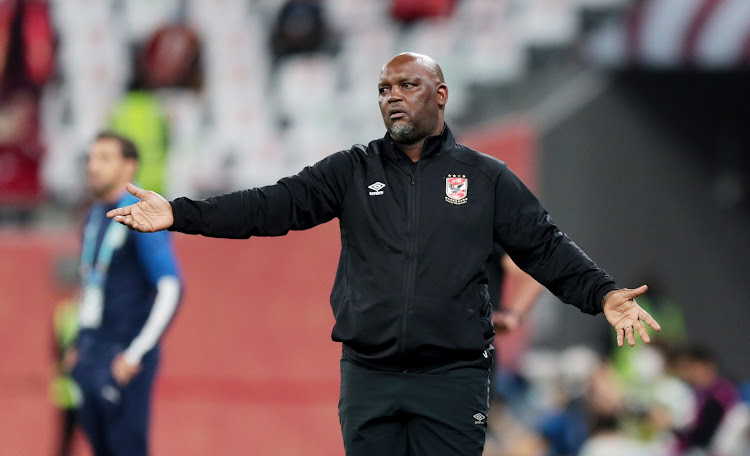 Pitso Mosimane’s view on a return to Bafana Bafana has not changed and the Al Ahly coach remains steadfast that he is not interested in working for the SA Football Association (Safa)‚ a source close to the coach has revealed.

Reports have been that Safa’s technical committee‚ meeting on Wednesday for a further planning meeting on finding a successor to Molefi Ntseki‚ who was fired on March 31‚ want the association to approach Mosimane about a return to Bafana.

Mosimane became a South African rarity as a coaching export to a major foreign club when he left Mamelodi Sundowns‚ where he won 11 trophies in eight years‚ to join Cairo giants Ahly in late September 2020.

The next Bafana Bafana coach will either be Frenchman Philippe Troussier or Portuguese coach Carlos Queiroz.
Sport
1 year ago

Mosimane, who plotted Sundowns’ 2016 Caf Champions League success‚ had previously indicated he was not interested in a return to Bafana. He was assistant coach of the national team from 2007 to 2010‚ then head coach until 2012.

A source close to Mosimane‚ who did not want to be named‚ said the Ahly coach has not been contacted by Safa.

The source said Mosimane’s ambitions at present are further than South Africa‚ or Bafana.

“It would be the same thing as asking Percy Tau to come and play for Kaizer Chiefs. Once you go to Belgium or wherever‚ then you will come back to hang your boots here [in SA].”

The source said even if Mosimane lost his job at Ahly, he would probably view the Middle East as his next logical career progression.

Mosimane had previously stated‚ in a press conference soon after Ntseki’s predecessor‚ Stuart Baxter‚ had resigned as Bafana coach‚ that he would not return to the Bafana coaching job.

In a famous quote‚ the outspoken then-Sundowns coach‚ when asked what his reaction would be if he was approached by Safa‚ said in August 2019: “I have done Bafana. I was there for five years. And I have benefited a lot at Safa.

“I have been on the bench against Portugal‚ Germany‚ Spain. Safa took me to Germany for two months to learn.

“What was not nice was the way it happened when they sacked me. I don’t believe a coach after two years‚ who loses two games‚ should be fired.

“And it was sad to be fired by a taxi owner [then-Safa technical committee chairman Fanyana Sibanyoni]‚ a priest [then-CEO Robin Petersen] and by a traditional chief [then-vice president Chief Mwelo Nonkonyana].

“ ... At Sundowns my fate is on the pitch. My results keep me here. So‚ I mean‚ once bitten twice shy. I don’t want to have my fate under those people.”

Mosimane took over from Swiss Rene Weiler at Ahly in the Covid-19-extended 2019-20 Egyptian season and oversaw the clinching of a treble.

The Cairo club had already wrapped up the Egyptian Premier League title‚ and Mosimane oversaw an unbeaten end to the campaign. He won the Egyptian Cup from the quarterfinal stage and Caf Champions League from the semifinals.

In February he steered Ahly to a creditable third place at the delayed 2020 Fifa Club World Cup.

Ahly are into the 2020-21 Champions League quarterfinals‚ where they stand to meet SA’s two qualifiers‚ Sundowns and Kaizer Chiefs. The Red Devils are in fourth place in the league‚ but with a number of games in hand.

Ntseki was released from his contract by Safa after Bafana failed to qualify for the 2021 Africa Cup of Nations last month.