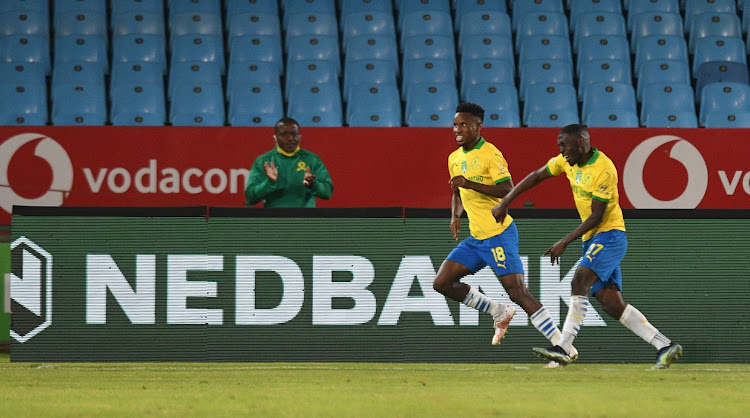 Mamelodi Sundowns continued their domineering run on the domestic scene with a comprehensive 4-1 thrashing of hapless Orlando Pirates in their Nedbank Cup, quarterfinal match at Loftus on Thursday night.

With this victory  the Brazilians have booked a place in the semifinal with Tshakhuma Tsha Madzivhandila (TTM) on Sunday at home where they will be looking to keep their hopes of a treble alive.

They are still in the quarterfinal of the Caf Champions League and are enjoying a six point lead at the top of the DStv Premiership over second-placed AmaZulu, who have played two games more.

This victory, achieved through a goal in the first half by Peter Shalulile and three more by Themba Zwane, Lesedi Kapinga and Hlompho Kekana after the break, has stretched their domestic unbeaten run to 23 matches.

It is also worth noting that when they line-up against TTM on Sunday in the semis, it will their fourth match in 10 days following recent outings against CR Belouizdad of Algeria, Chippa United and Pirates.

The match got off to a flying start and Pirates got an early injury scare when goalkeeper Wayne Sandilands needed medical attention after he was struck on the head by a close range shot from Shalulile.

There was another scare for Pirates a few minutes later when defender Paseka Mako awkwardly fell to the ground after he collided with Gaston Sirino but he was able to continue with the match after a concussion test.

Sundowns opened the scoring after 12 minutes through the effort of Shalulile, who beat Sandilands with a shot from outside the box after he received a cleverly taken long pass from Rivaldo Coetzee.

On the half hour mark, Shalulile and Zwane failed to communicate inside the box and an opportunity to increase their lead went begging after they breached the Pirates defence.

It was not all about Sundowns as Pirates had their notable moments through Deon Hotto, Gabadinho Mhango and Tshegofatsho Mabasa, but the Sundowns defence marshaled by Mosa Lebusa and Rushine de Reuck stood firm.

Pirates got it right just after the half hour mark when Mabasa equalised when he connected with a pass from Mhango from the left side after the Sundowns defence was caught napping.

Four minutes from the break, Lebusa produced a timely sliding tackle inside the box to deny goal-bound Mhango as Pirates continued to create chances in search of the second goal.

Sundowns retook the lead three minutes after the restart through the sensational Zwane when he struck with his weaker left foot from a tight angle to find the net after Sundowns got the better of the Pirates defence.

Sundowns ensured passage to the semifinal with a well taken goal curling shot by Kapinga after he received the ball from Zwane after 78 minutes and this match was put beyond doubt by Kekana five minutes from time.

The process of finding the new Bafana Bafana coach will gather momentum when the Safa Technical Committee reconvenes on Wednesday to come up with a ...
Sport
1 year ago

Merseyside Police said they have launched an investigation after the bus carrying Real Madrid players was damaged as it arrived at Anfield for ...
Sport
1 year ago

Claude Le Roy has resigned as coach of Togo after they failed to qualify for the Africa Cup of Nations finals but said he was far from finished in ...
Sport
1 year ago

South Africa Under-23 coach David Notoane named a provisional squad of 40 players for the Tokyo Olympics on Thursday that included overage Bafana ...
Sport
1 year ago

Pirates coach Zinnbauer ahead of Sundowns showdown: 'now we have a system'

Mamelodi Sundowns may be a winning machine‚ but Orlando Pirates coach Josef Zinnbauer says his team are increasingly clicking into clockwork-like ...
Sport
1 year ago

On the back of seven matches unbeaten‚ and having already surpassed expectations reaching the Caf Champions League quarterfinals‚ Kaizer Chiefs now ...
Sport
1 year ago