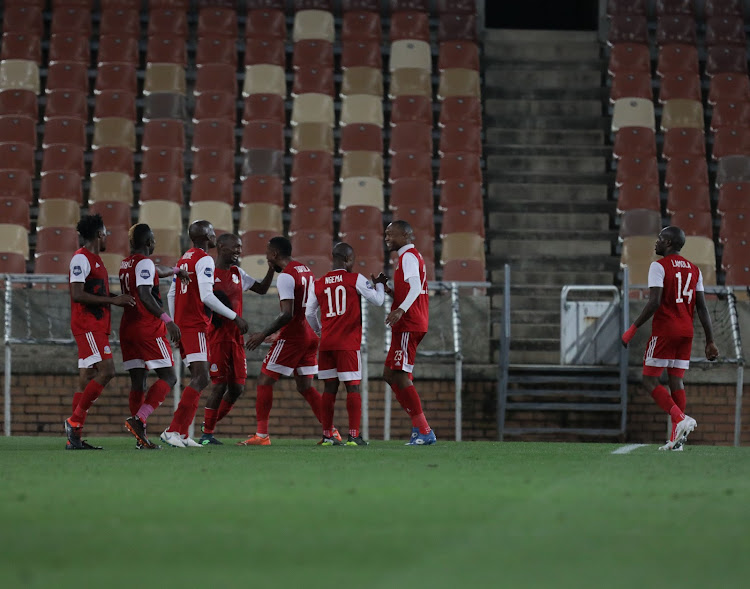 Simply nothing is going Kaizer Chiefs’ way, as, having seemingly scrambled a 10-man draw against Tshakhuma Tsha Madzivhandila (TTM) on Tuesday night, Amakhosi conceded from the penalty spot in the dying seconds for a 2-1 defeat.

Chiefs appeared to have secured at least a second unconvincing DStv Premiership draw in succession at Peter Mokaba Stadium in Polokwane, as the wins Amakhosi desperately need to improve their bottom-half position remain painfully elusive.

But even that unsatisfying result slipped from their grasp.

Chiefs had Njabulo Blom sent off for a second bookable offence as early as the 38th minute.

They conceded soon after that, Thabo Rakhale striking TTM into the lead with a peach of a strike in the 42nd.

Lebogang Manyama equalised following up to his own saved penalty in the 66th.

In the dying seconds of the sixth and final minute of added time Siyagonga Ngezana was unfortunate to handball, Thabo Mnyamane scoring the 98th-minute winner from the spot.

Yet another poor result for Chiefs was largely the result of a flat opening half.

Gavin Hunt’s side improved markedly with 10 men in an exciting second 45 minutes that was somewhat end-to-end against Dylan Kerr’s plucky TTM.

Amakhosi have one win from six league matches as they attempt to lift themselves into the top eight at the death end of the league campaign.

A somewhat startling statistic is they have three victories in 20 league and cup games.

If Chiefs had looked unconvincing in their 1-0 home defeat to Chippa United and 2-2 away draw against Bloemfontein Celtic in their last two matches, they lowered that a notch in a first half against TTM where events unfolded disastrously for the struggling Soweto giants.

Even before having a player sent off, Chiefs’ attempts to probe were not overly inventive and hit a wall of TTM’s decently structured defence.

It was the Limpopo team showing increasing signs in the opening half-hour of confidence in their movement, as Mnyamane’s low shot forced goalkeeper Bruce Bvuma into a diving save.

A run by Ndabayithethwa Ndlondlo resulted in Blom wrapping an arm about the midfielder’s neck, referee Victor Hlungwani producing a second yellow card to the Chiefs player.

The resultant free-kick was struck with power on to the crossbar by Mnyamane.

A goal for TTM seemed inevitable, and it came in characteristic Rakhale style, the winger taking Myamane's chip on his chest before volleying past Bvuma.

Chiefs equalised as they lifted their movement in attack.

Manyama received a ball from Samir Nurković, turned, dribbled through three defenders and forced a save from TTM keeper Washington Arubi.

In the 62nd Nurkovic was through on to a lob into the area and clattered down by centreback Ayanda Nkili, referee Hlungwani awarding the penalty.

Manyama’s effort from the spot was weak and stopped by Arubi, the Chiefs man latching on to the loose ball wide on the left and placing across an exposed goal line.

With about than five seconds of six minutes of added time remaining, a bouncing ball struck Ngezana’s arm, Hlungwani awarding the second spot kick of the game.

A medical board appointed to investigate the death of Diego Maradona has concluded that the soccer star's medical team acted in an “inappropriate, ...
News
1 year ago

AmaZulu coach Benni McCarthy says he is proud of his players after they beat KwaZulu-Natal neighbours Lamontville Golden Arrows to go top of the ...
Sport
1 year ago

Spotify CEO and founder Daniel Ek has contacted Arsenal owner Stan Kroenke's family to make an offer to buy the Premier League club but a takeover ...
Sport
1 year ago

High-flying AmaZulu have been confirmed as the DStv Premiership Q-Innovation winners for the third quarter.
Sport
1 year ago

Manchester United's Premier League match against Liverpool was postponed on Sunday after United fans forced their way into the stadium and stormed ...
Sport
1 year ago

Orlando Pirates coach Josef Zinnbauer said their home defeat against Mamelodi Sundowns on Sunday‚ which further dented their chances of finishing in ...
Sport
1 year ago