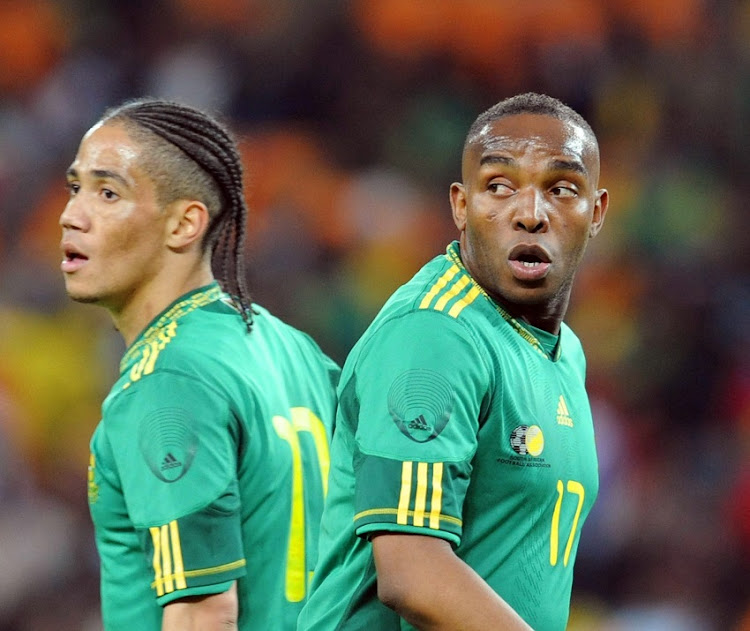 Former Bafana Bafana stars Benni McCarthy and Steven Pienaar during the International friendly between SA and Columbia at Soccer City on May 27 2010 in Johannesburg.
Image: Lefty Shivambu / Gallo Images

Former Bafana Bafana captain Steven Pienaar says Benni McCarthy has the stature to take over the national team head coaching job‚ has shown enough potential in his coaching career and would command the respect of the players.

AmaZulu coach McCarthy has been heavily linked to the national post vacated when Molefi Ntseki was released from his contract by the SA Football Association (Safa) on March 31.

TimesLIVE has reported that McCarthy had agreed to take the job in principal. However there remain stumbling blocks‚ such as whether AmaZulu chairman Sandile Zungu can be persuaded to let his coach go‚ and whether Safa would agree to requirements from McCarthy that he be allowed to bring Usuthu assistant Siyabonga Nomvete and goalkeeper-coach Moeneeb Josephs to Bafana.

AmaZulu coach Benni McCarthy says he is proud of his players after they beat KwaZulu-Natal neighbours Lamontville Golden Arrows to go top of the ...
Sport
1 year ago

“I think the whole thing with the national team‚ the structure within the set-up for the coaches hasn’t been that great for the last few years — we have to be honest about that‚” Pienaar told TimesLIVE.

“If you look at the previous coach [Ntseki]‚ I don’t think he had much support inside the structure for him to just go about his business‚ and how he wanted the national team to play.

“But I think Benni‚ on the other hand‚ has got a clear structure. He showed at Cape Town City the kind of football he wants to play.

“He’s a people’s manager. He’s been in that situation before [as a player]‚ played for the national team and at the highest level. So he knows how to communicate to the players.

“And that’s important. The players will also have respect for the manager‚ because obviously he’s been there and done it‚ and he’s seen it all.

“So I think with his stature‚ if you get him into the national team set-up it will only benefit the country.”

Benni McCarthy must be the most frustrated man this side of the Equator after watching title rivals Mamelodi Sundowns dig deep to outclass Orlando ...
Sport
1 year ago

Pienaar was speaking in an interview arranged to promote a #HeinekenUCLLive Twitter experience that will allow fans to communicate with each other during this week’s Uefa Champions League semifinals‚ and the final on May 29.

The Bafana 2010 World Cup star said McCarthy, 43, has shown plenty of promise in his two club head coaching stints. At Cape Town City McCarthy won the 2018 MTN8 trophy; and AmaZulu are in second place and challenging Mamelodi Sundowns for the DStv Premiership in 2020-21.

“If you look at his first few years with Cape Town City‚ he did a great job there. He moved onto AmaZulu‚ and even now they are pushing Sundowns‚” Pienaar said.

“It’s just compliments — you have to give it to him. He’s getting the best out of a bunch of players at AmaZulu who are not at the level of Sundowns‚ but he’s making them perform at that level.

“It will be great to have a former player‚ standing in front of our players‚ who’s respected among his colleagues in the football fraternity in the country. So it would be great to have him as the coach.

“I don’t know what’s going on behind the scenes. But if Safa can pull that one off it will only be good for the country and for the national team.”

Pienaar is currently a youth coach trainee at Ajax Amsterdam‚ who he joined as a player from Ajax Cape Town in 2001. McCarthy played for Ajax Amsterdam from 1997 to 1999.

Neither McCarthy nor Safa has confirmed the news yet, but the association is expected to make the formal announcement on Wednesday.
Sport
1 year ago

Benni McCarthy insists AmaZulu are not counting their chickens before they hatch as far as their challenge for the DStv Premiership title goes.
Sport
1 year ago