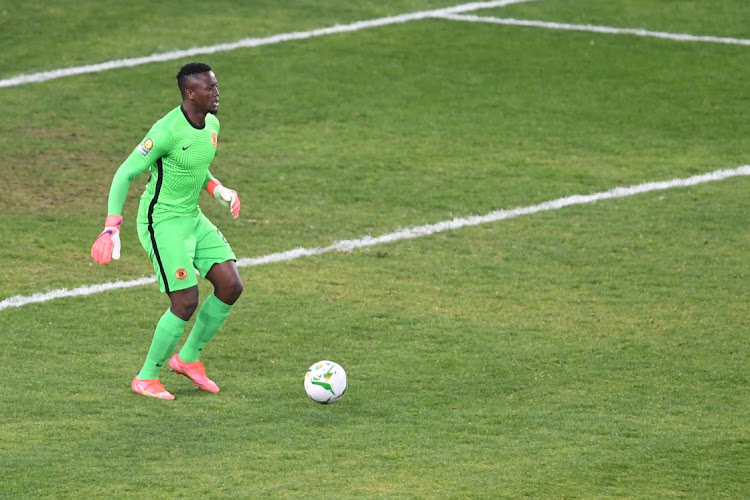 Bruce Bvuma had a match to remember as Kaizer Chiefs won the first leg of the Caf Champions League semifinal against Wydad in Casablanca.
Image: Lefty Shivambu

After the intensity of 90 minutes making charged-up saves and marshalling his defence, playing a starring role in Kaizer Chiefs’ epic 1-0 away win against Wydad Casablanca in the Caf Champions League semifinals‚ Bruce Bvuma broke down in tears at the final whistle.

So long in the shadow as the understudy to Bafana Bafana goalkeeping legend Itumeleng Khune and others at Chiefs‚ Bvuma was often unfairly written off by the supporters as not being top-class.

A run of form while Khune and Daniel Akpeyi were injured meant he kept his place ahead of those two in Saturday night’s first leg at Stade Mohamed V.

Chiefs’ brave parking of the bus and harassment earned a victory for the history books that has them on the verge of a Champions League final.

Amakhosi caretaker-coach Arthur Zwane‚ who had coached Bvuma in the club’s development‚ said he thought the emotions associated with the intensity of the performance‚ and perhaps a realisation of the significance it could have for his career‚ saw Bvuma in tears afterwards.

“I think Bruce is growing in stature. He’s been working very hard as a young man‚” Zwane said.

“And because we’re very close to each other – we used to be in the development‚ me and him – before the game I told him that‚ ‘It is very key for you in tonight’s game to keep a clean sheet and that will go a long way in your career’.

“We had planned to make sure that we didn’t concede‚ and maybe that is why he broke down after the game‚ because he was obviously happy that he didn’t concede.

“But‚ like I said‚ we still have another 90 minutes to play and we have to make sure that we keep a clean sheet and maybe also get another goal‚ and wrap it up at home.”

POLL | Do you think Kaizer Chiefs will make it to the Champions League final?

Royal AM will play their GladAfrica play-off match against Chippa United at the Chatsworth Stadium in Durban on Tuesday despite vowing in a letter to ...
Sport
1 year ago

Kaizer Chiefs played to a “compact and disciplined” gameplan that frustrated crack outfit Wydad Casablanca, to the point of earning a 1-0 away win in ...
Sport
1 year ago