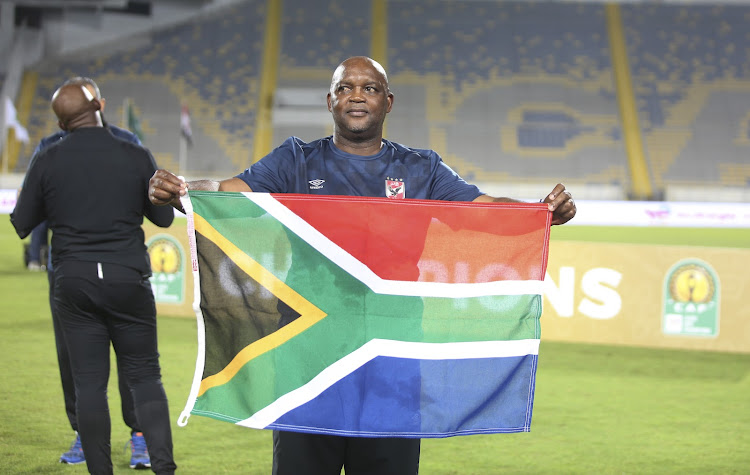 Pitso Mosimane said he was not thrown off by Stuart Baxter’s late appearance on the bench for Kaizer Chiefs‚ whose tactics did not surprise Al Ahly’s SA technical team in a 3-0 Caf Champions League final win to the Egyptian giants.

Chiefs had cagily refused to disclose if new head coach Baxter’s work permit had arrived before leaving on Thursday for the final at Stade Mohamed V in Casablanca‚ Morocco. The first indication Baxter would be on the bench was when he took the pre-match press conference on Friday.

This raised speculation Amakhosi had kept Baxter as a ‘secret weapon’‚ given the psychological factor of him having been the coach whose Bafana Bafana‚ also rank underdogs‚ shocked hosts Egypt in the second round at the 2019 Africa Cup of Nations.

Many Amakhosi supporters have questioned whether Chiefs should have stuck with caretakers Arthur Zwane and Dillon Sheppard‚ who steered the club to a 1-0 aggregate semifinal win against Wydad Athletic in the semifinals‚ on the bench. Chiefs’ defensive tactics in the final have also been queried.

Mosimane said Chiefs were right to maintain the tactics that saw them progress past Wydad‚ but added that his personal decision would have been to keep Zwane on the bench.

“What’s good is that both teams stuck to their principles‚ and that shows maturity‚” he said‚ asked if Baxter’s late presence had surprised Ahly at all.

“Because you cannot blame Kaizer Chiefs because of the score. Of course they got a red card‚ and that gave us an opportunity.

“But even before the red card the tactics came out the same — everything came out as expected.

“We didn’t change our tactics and they didn’t. And why should they change their tactics if they reached the Champions League final?

“You can criticise them but they reached the final. Those that have better tactics‚ why did they not reach the final?

“ ... For me it’s to give respect to coach Gavin Hunt because he doesn’t get credit for taking the team to the semifinals.

“And we must give credit to coach Arthur Zwane‚ with his assistant ‘Sheppie’ [Dillon Sheppard] for taking the team to the final.

“And also give credit to Stuart because I know he’s been behind the scenes and helping them.

“But as a local boy‚ as a township boy‚ I’m very happy for Arthur Zwane. For me‚ if it was my way‚ I think he could have got the gong again and finished what he has started.

“But let’s not forget Huntie‚ he did well. And the way they played suited them in the Champions League final.”

Chiefs held their own in the first half but had attacker Happy Mashiane sent off in added time for a rash challenge on Akram Tawfik. Ten-man Chiefs were easily outgunned in the second half.

Given the mismatch between the nine-time champions and a side who had never previously reached the group stage‚ Chiefs keeping to the defensive tactics that had seen them shock Wydad was understandable‚ though the team did start the final brightly committing more numbers in the transition.

What was always an uphill battle for Amakhosi became too steep a gradient after Mashiane’s dismissal.

South Africa have confirmed three positive Covid-19 cases in their soccer squad for the Olympic Games in Tokyo, including players Thabiso Monyane and ...
Sport
1 year ago

Bafana Bafana have earned the right to smile again after the long-suffering national side beat Senegal on penalties to win the 2021 Cosafa Cup at a ...
Sport
1 year ago

Pitso Mosimane has been embroiled in a tense standoff with his former club for months.
Sport
1 year ago

"Before we roast Kaizer Chiefs, let us congratulate them for making it this far in the competition," wrote one fan.
Sport
1 year ago

Al Ahly were hungrier for their 10th Caf Champions League final‚ and ultimately the class of a team who had convincingly reached the final showed ...
Sport
1 year ago