SA have themselves to blame after dispiriting loss to France 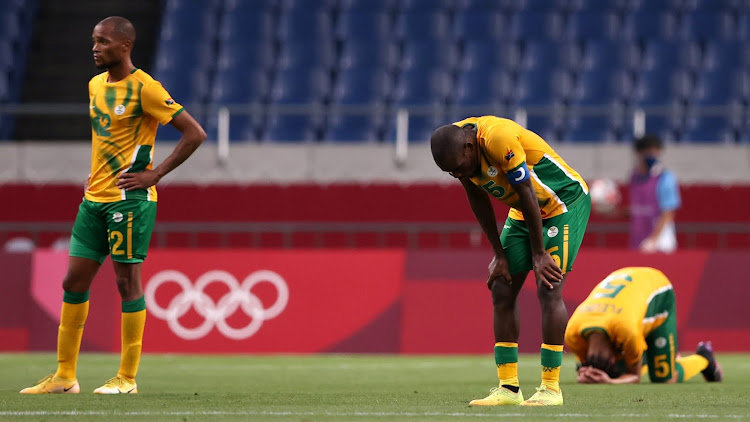 The SA under-23 side have themselves to blame after they were beaten by France in a seven-goal thriller they should have wrapped up comfortably at the Tokyo Olympic Games match on Sunday.

The South Africans had no business losing this match after leading three times‚ but they somehow contrived to allow the French to come back through a hat-trick from the troublesome André-Pierre Gignac before the European side eventually snatched the winner courtesy of a late strike from Teji Savanier.

After going to the halftime break with the two sides still locked at 0-0‚ the match suddenly sparked into life in the second period when Kobamelo Kodisang benefited from a defensive blunder between Clement Michelin and goalkeeper Paul Bernadoni to put the South Africans in the lead in the 52nd minute.

But the French responded almost immediately when Randal Muani Kolo put Gignac through for his first goal of the match in the 56th minute.

Horrified SA coach David Notoane would watch his charges repeat the trick on several occasions during a match that also saw Luther Singh miss a penalty.

The South Africans regained the lead after Evidence Makgopa converted a cross from Kodisang to beat Bernadoni in the near-post in the 72nd minute.

But SA's Achilles Heel returned to haunt them in the 77th minute when Michelin made up for the blunder that led to the opening goal of the match and sent a cross to Gignac‚ who rose above the defence to draw the French level again.

The South Africans went into the lead again in the 80th minute when Teboho Mokoena delivered a stunner from long range that goalkeeper Bernadoni did not know much about.

It was a special goal that was worthy of winning the match but just as they had done during the 90 minutes‚ the South Africans again surrendered their lead‚ this time from the penalty spot.

Referee Kevin Ortega ruled that SA goalkeeper Ronwen Williams had brought down Arnaud Nordin down in the area and pointed to the spot five minutes from regulation time.

The 35-year-old Gignac‚ the oldest man on the pitch‚ once again stepped up and converted the kick‚ drawing his side level.

The game was seemingly heading for a draw when Savanier scored the winner deep in optional time.

The disciplinary committee (DC) hearing into Royal AM's no-shows to their Premier Soccer League promotion-relegation playoff matches has been ...
Sport
9 months ago

For 14 years the Kliptown Youth Program has been looking after school kids in this Soweto neighbourhood, tackling poverty at its root, writes Sue de ...
Opinion & Analysis
9 months ago

Orlando Pirates have unveiled their home and away kit for the 2021-22 season‚ which the club says is a combination of vintage and modern.
Sport
10 months ago