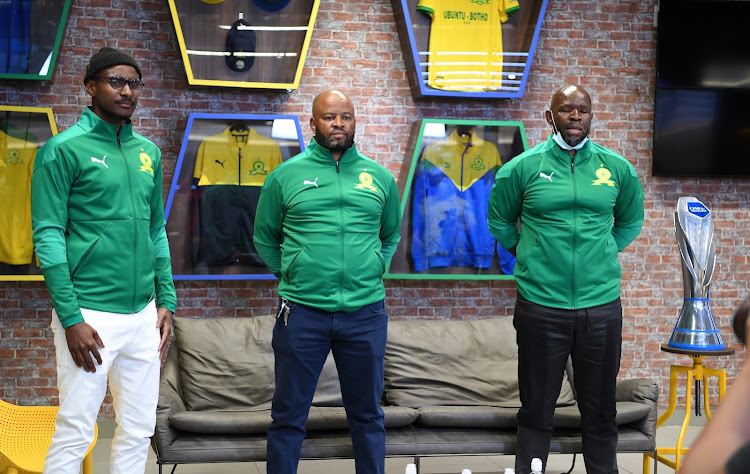 Mamelodi Sundowns coach Manqoba Mngqithi says he will not be surprised if Kaizer Chiefs counterpart Stuart Baxter plays his trademark transition game in Sunday’s MTN8 quarterfinal, but added he is not sure how Samir Nurković can fit into that style.

In the headline matchup of the four MTN8 games that open the 2021-22 season Chiefs, bolstered by signings and the return of Baxter, face a test of their competitiveness against four-time successive DStv Premiership champions Sundowns at Lucas Moripe Stadium.

Former Bafana Bafana coach Baxter has already gone on record ahead of the new season defending transition and counterattacking football as part of the modern game.

Mngqithi appeared to respond — perhaps also turning up the mind games — by questioning if Chiefs’ key striker Nurkovic, an excellent finisher who lacks pace, can fit into a counterattacking game model.

“I was hoping you were not going to ask that question because I am feeling, based on the talk he [Baxter] has made in the media, that he’s also coming out guns blazing,” Mngqithi said in the pre-match press conference, asked about Baxter’s transition football and how he expects Chiefs to take shape.

“They want to reassume their status of being a big team in the county.”

The Downs coach continued: “The transitional and the counterattacking game means you are not making a lot of initiatives to take the game to yourself.

“We know for a fact Baxter is very dangerous on transitioning. And in my mind I’m thinking already of players like [Kgaogelo] Sekgota and Keagan Dolly.

“But a very big contrast on Nurkovic, because he’s a box striker, and if they want to play a counterattacking game then it means he must come out from the halfway line — and I don’t think that is his strength.

“That would be a compromise in terms of structure, which is why I think they would want to come out and play in and around our box, which would make the contest very interesting.

Mutual respect‚ selflessness‚ taking responsibility and compromise were some of the key reasons Manqoba Mngqithi‚ Steve Komphela and Rulani Mokwena ...
Sport
1 year ago

“But yes, they have got very useful players on counterattack like the ones I have mentioned. Khama Billiat is also effective in that space.

“In the midfield they have signed quite well. Phathutshedzo Nange, Cole Alexander and [Nkosingiphile] Ngcobo have all got a good pass. But it’s a big question as to who exactly they are going to use in that midfield.

“Because you also need players who can help them defensively there, which brings Willard Katsande and Njabulo Blom into play, and even Bernard Parker, who has done very well in midfield.

“So it’s going to be very interesting, because at this stage it’s very difficult to know what they will do.

“But one thing you know is that Nurkovic is a very important player for them, and must play. And if they want to play a counterattacking game then Nurkovic will forever be late into the box.

“But if they want to play with a proper build-up scheme — because Stuart can do that; he’s a very good coach, I have a lot of respect for him — it’s going to be interesting.”

After six seasons without a trophy, Chiefs have brought back Baxter, the last coach to win silverware at the club with league and cup doubles in 2012-13 and 2014-15, and gone on a signing spree.

They will test themselves against the recently unparalleled trophy powerhouse of SA football in Downs.

Baxter: ‘Bibo’ Radebe could be a strong candidate for Kaizer Chiefs

Sabelo Radebe has surprised Stuart Baxter with his progress, the coach pronouncing that if the Kaizer Chiefs development product continues to work ...
Sport
10 months ago

Stuart Baxter is going to “change Kaizer Chiefs”‚ make them competitive and in all likelihood have them challenging for the DStv Premiership in ...
Sport
10 months ago

Mamelodi Sundowns launch their new jersey ahead of the coming season

Mamelodi Sundowns have launched kit that has the traditional look of the club from afar‚ but in the finer detail reflects Downs’ five-year ...
Sport
10 months ago