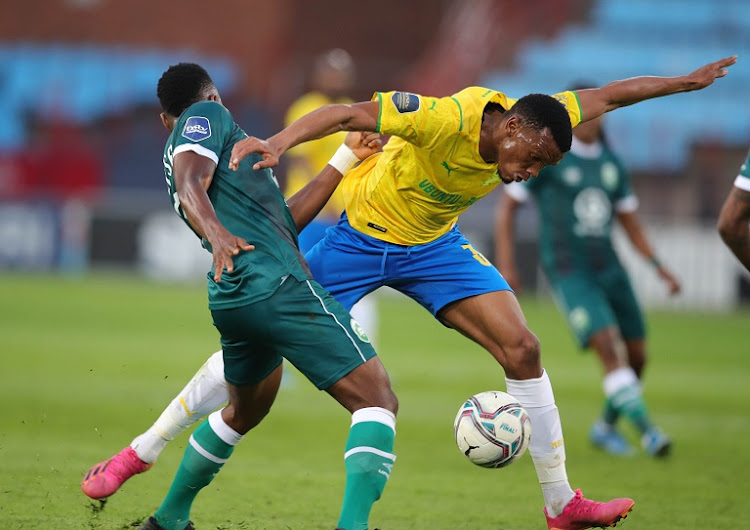 Mothobi Mvala of Mamelodi Sundowns challenged by Mattar Ceesay of AmaZulu in the DStv Premiership match between at Loftus Versfeld in Pretoria on August 20, 2021.
Image: Samuel Shivambu/BackpagePix/Gallo Images

Mamelodi Sundowns started the defence of their DStv Premiership title on a winning note by edging a determined AmaZulu 1-0 at Loftus on Friday afternoon.

This is the second win of the season in all competitions for the Brazilians, who are aiming for an unprecedented feat of five league title wins in a row, after they defeated rivals Kaizer Chiefs 2-1 in the MTN8 quarterfinals last weekend.

It is a different story for AmaZulu, their coach Benni McCarthy and his men as they have lost their opening two matches and they will be under pressure in their next league match when they host Swallows FC on Wednesday.

Sundowns will be in good spirits when they play their second game of the league campaign against Gavin Hunt’s Chippa United at the Nelson Mandela Bay Stadium on Tuesday.

Sundowns’ coaching trio of Manqoba Mngqithi, Steve Komphela and Rulani Mokwena started the match with the same line-up that beat Chiefs on penalties.

McCarthy made three changes to his XI that lost to 2-1 to Cape Town City last weekend with Bonginkosi Ntuli, Mattar Ceesay and Siphesihle Maduna on for Lehlohonolo Majoro, Luvuyo Memela and Augustine Mulenga.

The 2021-22 DStv Premiership kicks off on Friday evening with a tasty match-up between four-time successive champions Mamelodi Sundowns and last ...
Sport
5 months ago

There were no clear-cut chances in a first half that failed to produce a shot at goal as both sides tried to figure each other out, leaving goalkeepers Mweene and Veli Mothwa with not much to do.

The opening goal arrived two minutes from the break when Zwane showed nerves of steel from the spot to send Mothwa the wrong way after Thembela Sikhakhane was adjudged to have hacked down Shalulile in the box.

Khuliso Mudau started the attacking move and supplied the ball to Haashim Domingo who controlled before laying it in the path of Shalulile, who was brought down by Sikhakhane leaving Victor Hlungwani with no choice but to point to the spot.

AmaZulu went all out to equalise after the restart. Their most notable chance came just after the hour-mark when substitute attacker Majoro was denied by a timely clearance by Rushine de Reuck.

Minutes later, Shalulile was released by a defence-splitting pass from Zwane but his shot went agonisingly wide of the upright with Mothwa out of position and there were no more notable chances as the Brazilians claimed all the three points.

The PSL is yet to finalise plans to bring back fans and all media at football stadiums, the league’s chair Irvin Khoza said on Tuesday.
Sport
5 months ago

Did MaMkhize "destroy a 50-year brand" or "save the day"?
Sport
5 months ago

Chiefs coach Stuart Baxter has acknowledged that the frontline centreback pairing of Daniel Cardoso and Erick Mathoho have not been at their best for ...
Sport
5 months ago

PSL chairman Irvin Khoza, confirming the sale of Bloemfontein Celtic to Royal AM on Tuesday, said the league’s executive committee deliberated for ...
Sport
5 months ago

Expect a higher-intensity, higher-pressing, more dominant and less reactive Orlando Pirates under Fadlu Davids and Mandla Ncikazi, after the ...
Sport
5 months ago