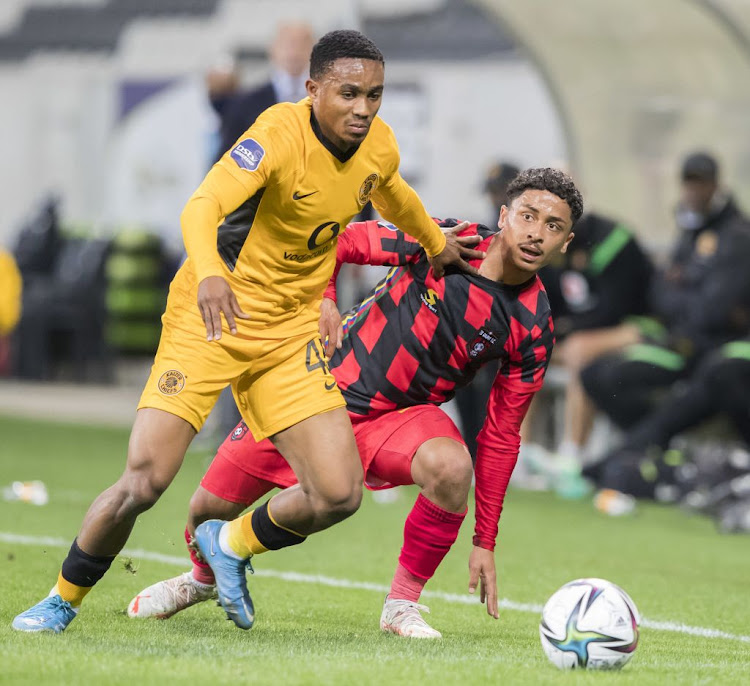 Njabulo Blom of Kaizer Chiefs and Ethan Brooks of TS Galaxy during the DStv Premiership match between the two sides at Mbombela Stadium on August 22, 2021
Image: Dirk Kotze/Gallo Images/BackpagePix

Kaizer Chiefs opened their league account with a goalless draw at TS Galaxy at Mbombela Stadium in Nelspruit on Sunday evening.

Chiefs fans will have been hoping to see the club make a blistering start to the new campaign under coach Stuart Baxter, and perhaps the result is a hint that the Englishman is not going to transform the club overnight.

The expectations are very high on Baxter's shoulders as he was the last coach to lead the side to silverware in 2015 and the fans desperately want his to end the long trophy drought.

It was a tightly contested affair at Mbombela Stadium and Baxter admitted that his charges are still very much a work in progress, and he needs time to build them into a unit that can challenge champions Mamelodi Sundowns.

It should not be a surprise that Kaizer Chiefs have started 2021-22 at times patchily, coach Stuart Baxter has said as his team prepare to kick off ...
Sport
8 months ago

Baxter was understandably not happy after the game and said he was frustrated as his charges never played to their strengths,

“We just were not good enough, our quality was too poor, especially on the breakdown to get longer attacks and pick our way through man-man inspired type of defense,” a disappointed Baxter said.

Galaxy will have been happy with the outcome as they gave a good account of themselves and held their own against the visitors for long periods.

Galaxy coach Owen da Gama was happy with the outcome and said his players deserved a pat on the back after the way they played.

The was a dearth of clear-cup opportunities and the best chance in the first half period fell to striker Samir Nurković, but his glancing header was brilliantly saved by Vasilije Kolak, who tipped ball in the 24th minute.

‘A meritocracy’: Mokwena on why Sundowns played same XI that beat Chiefs against AmaZulu

Mamelodi Sundowns coach Rulani Mokwena has explained that they kept the same team that dumped Kaizer Chiefs out of the MTN8 last weekend for the 1-0 ...
Sport
8 months ago

It proved to be the best chance of the opening period as the two sides seemed intent on cancelling each other out.

Galaxy visibly grew in confidence as the match progressed and they started to ask questions of goalkeeper Bruce Bvuma.

The pattern continued in the second half and the best opportunity fell to Khama Billiat. But he somehow  ballooned the ball into the stands when he had Kolak at his mercy.

The Zimbabwean had time and space to pick his spot, but he somehow hoofed the skywards, spurning a great opportunity to put the visitors in the lead.

In the end the two sides could not find the back of the net, and the game stuttered to a goalless conclusion.

Chiefs will be back in action on Wednesday when they welcome Baroka FC to FNB Stadium while Galaxy are away to Stellenbosch on the same day.

Mamelodi Sundowns started the defence of their DStv Premiership title on a winning note by edging a determined AmaZulu 1-0 at Loftus on Friday ...
Sport
8 months ago

Comparisons have been made in Stuart Baxter’s second stint as coach of Kaizer Chiefs to his first, though the coach admits this time around Amakhosi ...
Sport
9 months ago