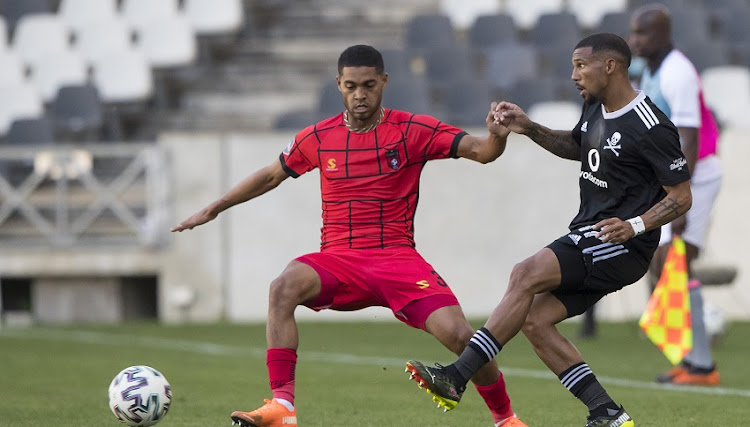 Ebrahim Seedat of TS Galaxy FC during the DStv Premiership match between TS Galaxy and Orlando Pirates at Mbombela Stadium on May 30, 2021 in Nelspruit, South Africa.
Image: Dirk Kotze/BackpagePix/Gallo Images

TS Galaxy defender Ebrahim Seedat has admitted that his team desperately need to start picking up points to get their DStv Premiership campaign on track.

As they prepared to take on Maritzburg United at the Harry Gwala Stadium on Saturday, the 28-year-old defender said earning three points is high on their agenda as it could move them from the bottom of the table.

Together with Marumo Gallants, Galaxy are the only two teams yet to register a win this season after seven completed league fixtures and they have two points to show from their troubles after five defeats and draws.

“Its starts at training. If we work hard and stick together we will get that result like the coach told us,” he said this week.

“Yes, there will be ups and downs but we have to keep our heads up high.

“We have to be motivated and have a lot of confidence. It's not a nice situation that we are in.”

Sead Ramović, who recently arrived at the club to replace fired Owen Da Gama, suffered a loss in his first game in charge against AmaZulu during the week and Seedat believes he can get the club out of the situation they find themselves in.

“I’m proud of my team. I think that we played very well. Our team was compacted and played with structure,” Ramović explained.

“We showed some improvement but I believe that we need some time to get better.”

The Rockets are sitting 16th on the standings but they will move form the bottom of the log with a win over Maritzburg because second from the bottom Marumo Gallants are not in league action this weekend.

In the other DStv Premiership fixture, Cape Town City take on Golden Arrows at the Cape Town Stadium with both teams looking to get back to winning ways after they lost their last matches against Sekhukhune United and Mamelodi Sundowns respectively.

Former Zambian national soccer coach Milutin Sredojevic was handed a suspended jail term after being convicted on two counts of sexual assault in the ...
News
1 month ago