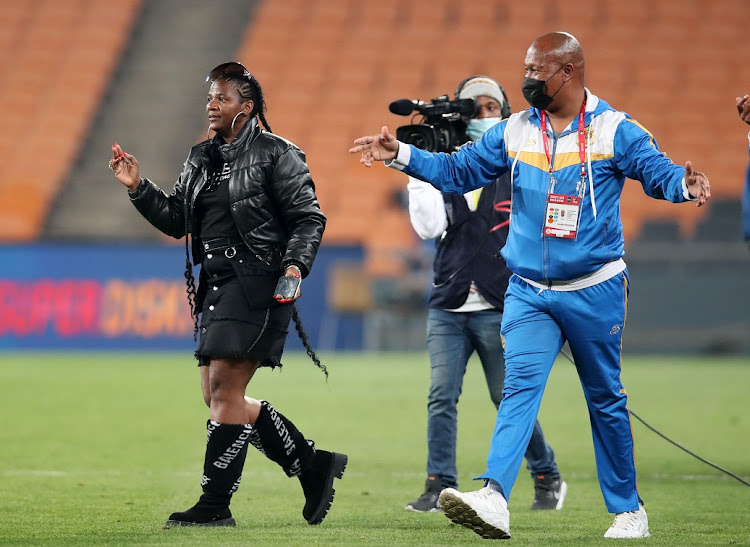 Royal AM owner Shauwn Mkhize during a DStv Premiership match. Royal have been hit with several hefty fines regarding a match where Mkhize handed out cash to players on the field.
Image: Muzi Ntombela/BackpagePix/Gallo Images

Royal AM and their officials have received a whopping R1.65m in fines regarding various charges the Durban club pleaded guilty to in relation to a DStv Premiership match where owner Shauwn Mkhize and son Andile Mpisane handed out cash to players on the field.

In total, TimesLIVE is informed, Royal AM and their officials were fined a whopping R1,650,000, though R1,325,000 of that was suspended, as part of a plea agreement they entered into in front of a Premier Soccer League disciplinary committee (DC) hearing.

So Royal and their officials will effectively pay R325,000 in total, on condition the same transgressions are not repeated within the prescribed period.

This was related to a match where club owner Mkhize and son Mpisane, Royal’s chair, handed out cash to their players on the pitch and in front of TV cameras after a 2-1 league win against Maritzburg United at Chatsworth Stadium on October 3.

The charges and fines the club received as the first respondent, were:

* pleaded guilty to attempting to pay football players in cash in front of the media, thereby bringing the league into disrepute – R500,000, with R250,000 suspended;

* pleaded guilty to failing to provide adequate security at the match (relating to having 10 more in their attendance party than the 60 allowed as per the PSL’s Covid-19 regulations) – R100,000, with R75,000 suspended;

* pleaded guilty to failing to ensure that their Covid-19 officer complied with his duties – R10,000;

* pleaded guilty to not having their players follow the walk-on procedures, in that they left the changerooms four minutes late (even though the match kicked off on time) – R10,000;

The charge and fine for the second respondent, Royal AM Covid-19 officer Sthembiso Hlongwane, was:

* admitted to not making sure all club officials and attendees wore face masks at all times – R10,000 (Hlongwane had a suspended sentence from previous club Real Kings last year for a similar offence, and also has to pay that further R180,000 previously suspended fine).

* admitted she contravened rule 55.3.8 in that she was seen to be attempting to give rewards to players after the match – R500,000, all suspended;

* pleaded guilty to attempting to reward players after the match – R500,000, all suspended;

Royal AM also had to pay all costs for the two DC sittings.

The NSL Handbook’s Rule 55.3.8. relates to “the giving, offering, promising or acceptance, whether directly or indirectly, of any inducement, reward or bribe, to anybody in relation to a match, the sport of football or the affairs of the league”.

MaMkhize gives tips on making it in business

"My life was invaded before I could even give permission for it to be invaded", reality TV star Shauwn shared.
TshisaLIVE
3 months ago

MaMkhize shares her opinion on enemies: The real enemies live inside us

"There is no enemy outside our soul. The real enemies live inside us, anger, ego, greed and hate," says Shauwn Mkhize.
TshisaLIVE
3 months ago

Premier Soccer League (PSL) prosecutor Nande Becker has confirmed to TimesLIVE that he is going to charge the increasingly controversial ...
Sport
3 months ago