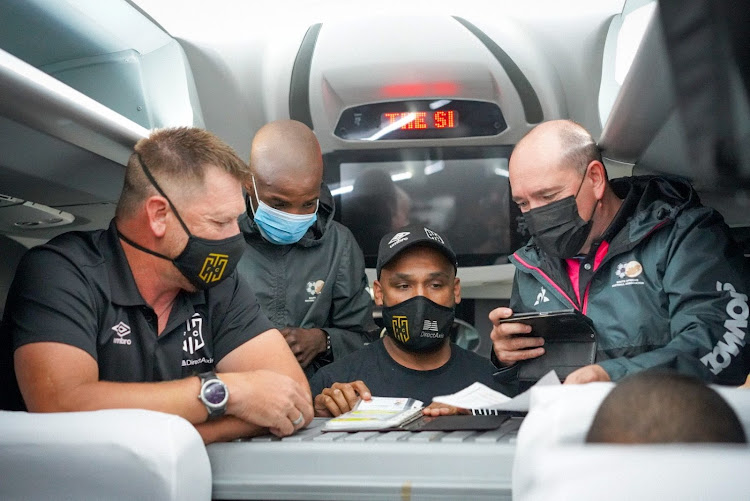 Cape Town City coach Eric Tinkler (left) and his technical staff go through last-minute planning on the team bus on their way to FNB Stadium for the DStv Premiership match against Kaizer Chiefs on December 4 2021. City, however, found themselves locked out of the stadium.
Image: Cape Town City FC/Twitter

Cape Town City were left locked outside the gates of FNB Stadium in a storm-soaked Johannesburg on Saturday evening having pitched up to honour their DStv Premiership fixture against Kaizer Chiefs.

A source from City, who did not want to be named, said the Cape club had travelled to Johannesburg for the match on Friday as they had no correspondence from the Premier Soccer League (PSL) informing them the game had been postponed, as Chiefs had requested form the league.

However, when City arrived at FNB Stadium ahead of the 6pm game late on Saturday afternoon, they found the gates locked and no-one there to let them in.

The match officials and match commissioner Paulo Marques were also stranded outside the stadium.

This was after Chiefs sent a letter to the PSL late in the week asking for a postponement of all four of their Premiership matches in December due to an outbreak of 31 cases of Covid-19 that had shut down the club's headquarters at Naturena.

Chiefs told the PSL they could not manage to put a team together to honour the fixture against City. Late on Friday night Chiefs put out a second statement saying they would “not be able” to host City.

Going through our usual card checks with match officials inside the team bus 💙#iamCityFC pic.twitter.com/vZ1lvqhSDi

On Friday afternoon, having attended a PSL executive committee (exco) meeting, of which he is a member, City chairperson John Comitis emerged under the impression, having had no correspondence to contrary from the league, that the match had not been postponed.

Reached for comment on Saturday evening, Bertie Grobbelaar, the CEO of Stadium Management SA (SMSA), the company that administers FNB Stadium, said he had told all staff at the stadium, and match security personnel, to stand down. He said he did this because Chiefs had instructed him the game against City had been been postponed.

“We were informed yesterday [on Friday] by Chiefs that the game had been postponed,” Grobbelaar said.

Asked if the PSL had communicated to SMSA that the game was postponed, Grobbelaar replied: “No but remember I’ve got nothing to do with the PSL.

“My agreement is with Chiefs. So they informed us yesterday that the game was not continuing and yesterday we cancelled all service providers, cancelled security, cancelled medics, and my staff."

Grobbelaar said he was aware that City were stranded outside the stadium.

“I’ve seen it on social media, and about half an hour ago the match commissioner phoned me too to say that he’s outside the gate, and I pretty much said to him what I said to you.

“There’s nothing strange that on a Saturday with no fixture we lock the stadium, and there are only two security members inside a security room – specifically now with Covid-19.”

The PSL’s communication, though, in this matter appears mystifying. It was widely reported that City were travelling to Johannesburg for the game as they had no instruction form the league not to.

On Friday, Comitis had told TimesLIVE that Chiefs’ request “was discussed at the exco. And the circumstances were debated and unfortunately those are confidential.

“But there was no acceding to Kaizer Chiefs that the game has been postponed, or the league having taken that decision.”

He added: “So at this stage the only thing I can say is that as Cape Town City FC we have not been notified by the league that the game has been postponed. So we, under the rules of the game, have to be at the venue to play. And we will be at the game, which we anticipate will happen at 6pm.”

The correct procedure, if the game was not postponed, would have been for City to take the field, Chiefs to have failed to show up, and the referee to blow their whistle for the start and end of the game.

The PSL, astoundingly, has given no official response in the form of a media statement on the status of the Chiefs-City match, or their response to Amakhosi’s request for postponements of their December matches.

Kaizer Chiefs have asked the Premier Soccer League to postpone their four matches in December due to an outbreak of Covid-19 cases among players and ...
Sport
1 month ago

PSL to discuss Kaizer Chiefs' request for postponement of matches

Kaizer Chiefs' request to the Premier Soccer League (PSL) to postpone the club's four league matches in December will be discussed at an executive ...
Sport
1 month ago

Cape Town City remains on schedule to fly to Johannesburg on Friday afternoon for their DStv Premiership match against Kaizer Chiefs at FNB Stadium ...
Sport
1 month ago