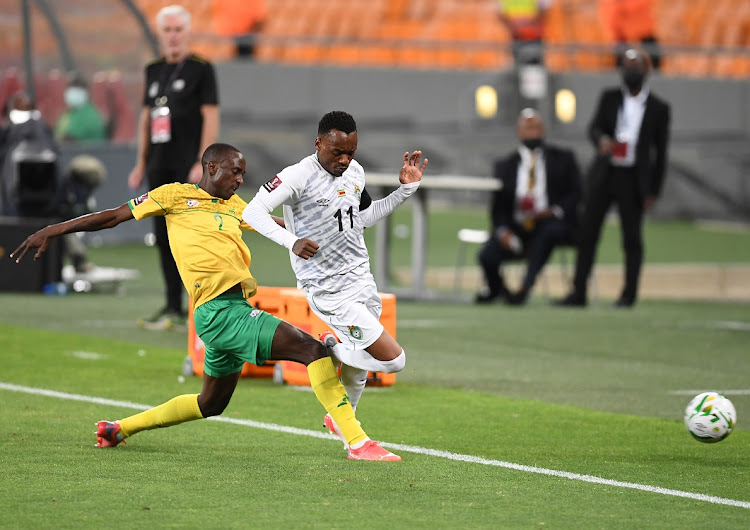 Nyiko Mobbie of SA challenges Khama Billiat of Zimbabwe in the 2022 FIFA World Cup qualifier at FNB Stadium in Johannesburg on November 11 2021. Billiat has since retired from international football, and was not named in Zimbabwe's squad for the Africa Cup of Nations.
Image: Lefty Shivambu/Gallo Images

Zimbabwe coach Norman Mapeza has named his 23-man squad for the Africa Cup of Nations finals in Cameroon, but is without a number of his leading players due to injury and abrupt international retirement.

Leading forward Khama Billiat of Kaizer Chiefs announced last month he had retired from international football. Mapeza had been hoping to change his mind, but Billiat has not been included in the final selection.

Left-back Jordan Zemura from English Championship side Bournemouth had been an injury doubt, but has been included, along with Leicester-born forward Admiral Muskwe, who plays for Luton Town.

There is also a recall for former Celtic midfielder Kundai Benyu, who now plies his trade in Iceland. He last played for the national team in 2017.

Zimbabwe open their Group B campaign against Senegal on January 10 and will also face Malawi and Guinea in their pool.

A whirlwind four-month spell at Orlando Pirates has catapulted their new centre back Olisa Ndah into Nigeria’s African Cup of Nations finals squad.
Sport
6 months ago

No surprise as Mamelodi Sundowns confirm signing of Bradley Ralani

Mahrez to captain Algeria at Africa Cup of Nations finals

Riyad Mahrez will captain Algeria as they defend their African Cup of Nations crown next month, named by coach Djamel Belmadi to lead his 28-man ...
Sport
6 months ago

Sadio Mane headlines a strong Senegal squad named on Friday for the Africa Cup of Nations finals where they will be one of the favourites.
Sport
6 months ago