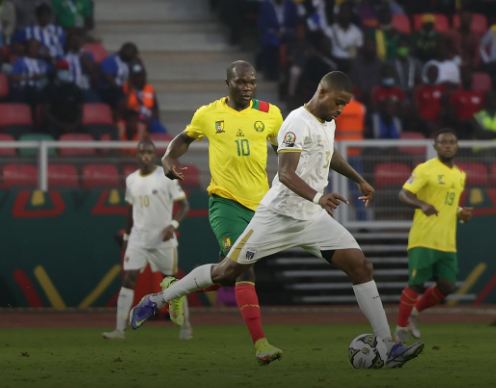 Cameroon gave up a second-half goal to the Cape Verde Islands as they were held to a 1-1 draw on Monday but the hosts still finished top of Group A in the Africa Cup of Nations.

Captain Vincent Aboubakar scored his fifth goal of the tournament to put Cameroon in the lead in the 39th minute before halftime substitute Garry Rodrigues equalised in the 53rd minute.

They are likely to advance as one of four best third placed finishers.

Burkina Faso into second round after draw with Ethiopia

Burkina Faso secured a place in the knockout stage at the Africa Cup of Nations after Cyrille Bayala’s first half goal helped them to an uninspiring ...
Sport
4 months ago

Rodrigues had been a surprise omission from the starting line-up but underlined his ability soon after coming on.

Aboubakar fired home a left footed shot after a botched clearance from the Cape Verdians, adding to a double scored in each of the opening two matches.

But Cameroon were unable to end the group phase with three victories, which had been their ambition.

“It was difficult opponent who made things tough for us,” Aboubakar told reporters.

“It was difficult to win although we wanted to finish with a 100% record.

"But we must not be negative about it because we are through.”

Aboubakar also missed a close-in chance in the second half, but overall Cameroon had limited chances in the match at the Olembe Stadium.

Burkina Faso finished second, also with four points, after a 1-1 draw with Ethiopia in the other Group A match.

Lack of drive, hunger and the shortage of coaches qualified to develop goalkeepers have been cited by two of SA’s legendary goalkeepers as some of ...
Sport
4 months ago