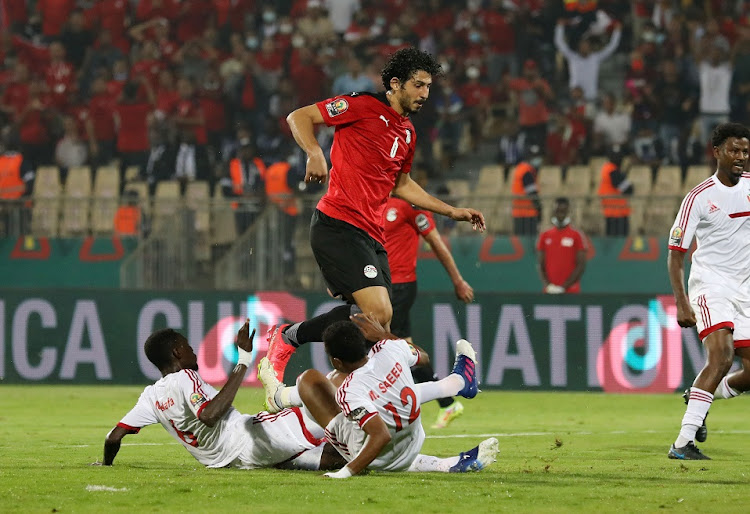 Ahmed Hegazy of Egypt is tackled by Mohamed Mustafa and Mustafa Saeed of Sudan in the 2021 Africa Cup of Nations match at Ahmadou Ahidjo Stadium in Yaounde, Cameroon on January 19 2022.
Image: Muzi Ntombela/BackpagePix

Egypt beat neighbours Sudan 1-0 in Yaounde on Wednesday to ensure their progress to the knockout stages of the Africa Cup of Nations, finishing second behind Nigeria in Group D after another laboured performance.

Centreback Mohamed Abdelmoneim, drafted in because of injury, headed home after 38 minutes from a corner to make the breakthrough as Egypt dominated the derby but created few chances.

The display will not do much to temper the criticism that followed the Egyptians' first two games at the tournament, a 1-0 loss to Nigeria followed by a narrow win over tiny Guinea Bissau.

Egypt ended with six points, three behind Nigeria, and will meet the winners of Group E, which is to be settled on Thursday. Sudan finished bottom of the group with one point.

We are more than a week into the Africa Cup of Nations finals, which have not always hit the great heights as a spectacle but have provided many ...
Sport
6 months ago

The SA Football Association is negotiating with European countries to play against Bafana Bafana in two high profile friendly matches during the next ...
Sport
6 months ago

Ghana coach Milovan Rajevac has said he will not resign after the team’s disastrous 3-2 defeat against tiny Comoros saw the Black Stars exit bottom ...
Sport
6 months ago

Zimbabwe play their last game at the Africa Cup of Nations in Yaounde on Tuesday and then head home to an uncertain future, including suspension by ...
Sport
7 months ago