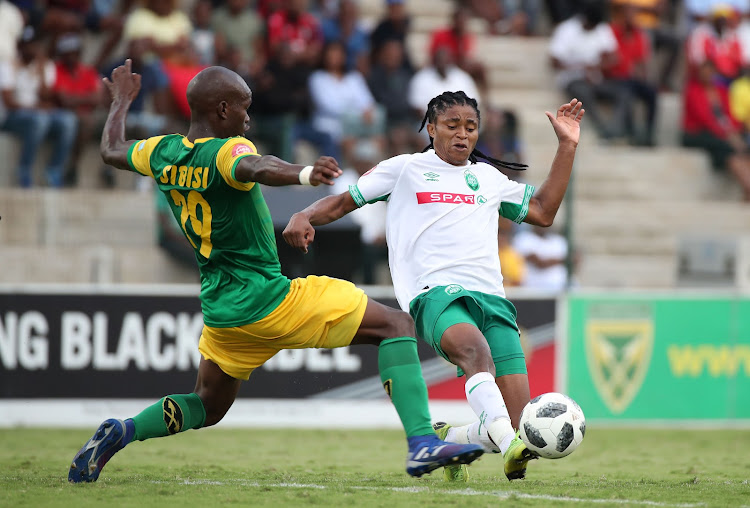 Siyethemba Sithebe of AmaZulu tackled by Nkosinathi Sibisi of Golden Arrows during the Absa Premiership 2018/19 match between Golden Arrows and AmaZulu at the Suger Ray Xulu Stadium, Clermont on April 14 2019.
Image: ©Muzi Ntombela/BackpagePix

Siyethemba Sithebe will not join Kaizer Chiefs before the transfer window closes on Monday night after last-ditch talks to force a move this month broke down.

So says attorney and intermediatory Sihlangu Sithebe, who is the player’s uncle, as he revealed to TimesLIVE that there has been discussions about pushing for a move on Monday, but these have deadlocked.

“There were negotiations between the clubs, but these are now closed as they could not agree on terms,” he said.

“Chiefs were offering two players in exchange for Siyethemba, but AmaZulu were only interested in a cash deal. So he remains a part of the AmaZulu squad for the rest of the season and as things stand will not be joining Chiefs at this time.”

Sihlangu Sithebe dismissed suggestions from AmaZulu owner Sandile Zungu that Chiefs had made an illegal approach for the attacking midfielder before they were allowed to open negotiations on January 1, when the 29-year-old entered the last six months of his contract. “That is not correct,” he says.

“There may have been other people talking to the player, but any official negotiations or offer has to come through me and I did not receive any before the window opened. If Zungu indicated that Siyethemba had finalised with other clubs [before January] that cannot be correct, because the only person who can conclude that contract is me."

He said the Bafana Bafana midfielder is committed to finishing the season with Usuthu and will give 100% to the club — if allowed. Zungu has previously suggested the player will not kick a ball for the team in the second half of the season, but Sihlangu Sithebe says this may be in breach of contract and could lead to them opening a case with the SA Football Association.

“They will still be paying his salary and he will certainly do everything to honour his contract with AmaZulu. I can’t see how they could not use him and that may even be a breach of contract whereby a player can invoke their rights with Safa. As people that are new in football I don’t think they would want such a case.”

Sithebe joined AmaZulu from Mbombela United before the 2017/2018 season and has been a regular in the side, starting every match of the 2019/2020 season and making 118 appearances in all.

Kurt Lentjies has praised the potential of 16-year-old Luphumlo Sifumba, who shot to national prominence with a goal in the 3-0 victory for Coastal ...
Sport
5 months ago

Itumeleng Khune’s impressive performance in goal for Warriors as they beat Amabutho 2-1 in Saturday night’s DStv Compact Cup semifinal may have give ...
Sport
5 months ago

AmaZulu moved to sixth place on the DStv Premiership standings after a lone strike from Luvuyo Memela was enough to earn a precious victory against ...
Sport
8 months ago