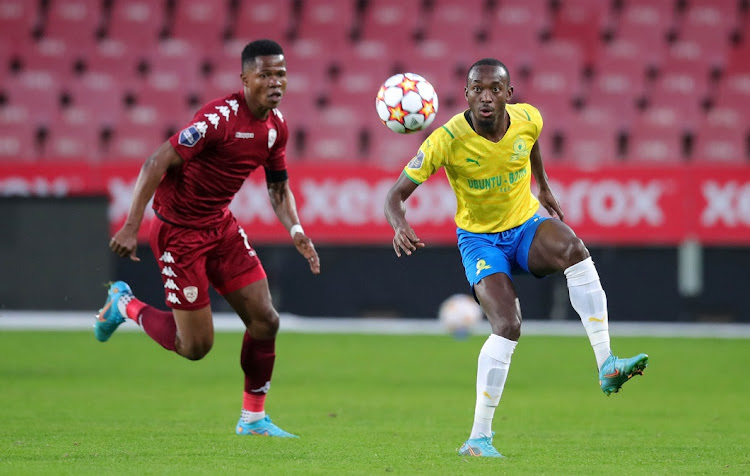 Peter Shalulile of Mamelodi Sundowns is challenged by Rodrick Kabwe of Sekhukhune United in the DStv Premiership match at Ellis Park in Johannesburg on May 3 2022.
Image: Samuel Shivambu/BackpagePix

This after the Namibian striker scored in Masandawana’s 2-0 DStv Premiership win over Sekhukhune United at Ellis Park on Tuesday. Shalulile is now on 22 goals.

The other Sundowns goal was scored by Aubrey Modiba in the first half while Shalulile scored in referee’s added time.

Modiba appears to be on some kind of purple patch as he was on the score sheet in the 2-1 Nedbank Cup semifinal win over Royal AM in Durban on Saturday.

Downs had already wrapped up the league title race ahead of the Tuesday clash, but still came into the match aiming to win as they look to end the season with 70 points.

This after it was impossible for them to beat their own record of 71 points, which they set when they won the league in the 2015-16 season under former coach Pitso Mosimane.

Masandawana's draw against Cape Town City at Loftus Stadium a week ago meant the champions can now finish the season with a maximum of 70 points.

The first half produced a single goal despite both sides creating a fair number of chances. Sundowns, who were the dominant force in the clash, had more chances but they either missed their opportunities or saw them saved by Sekhukhune’s goalkeeper Toaster Nsabata.

Gaston Sirino had two good chances inside the opening 20 minutes but narrowly missed the target on both occasions.

Rulani Mokwena joked about fielding Sundowns’ senior coach Steve Komphela in their defence when he was asked about injuries at the club after their ...
Sport
2 weeks ago

The hosts came close to breaking the deadlock when, after 27 minutes, a deflected Yusuf Maart free-kick troubled Sundowns’ goalie Reyaad Pieterse as he lost the ball, but fortunately for him there was no Sekhukhune player to pounce on the rebound.

A minute later Modiba scored a beautiful long-range goal as the champions took the lead.

In the second half Babina Noko continued their frantic search for the equaliser but could not get the better of Pieterse whenever they managed to penetrate Sundowns’ defence.

Shalulile came close to scoring goal number 22 when he tried to finish off a Neo Maema cross, but his header went over the crossbar on 54 minutes. The Namibian sharpshooter had another good chance in the 75th but another header was not successful.

Shalulile did not give up and he finally managed to find the back of the net in added time.

The match also saw Sundowns’ coaches give Pule Maraisane, the only Brazilians player who hadn’t played this season, a competitive run.

Maraisane joined the champions in October after parting ways with Cape Town All Stars in July 2021.

Mamelodi Sundowns remain on course to win a domestic treble after they capped a remarkable week in which they were confirmed as SA league champions ...
Sport
2 weeks ago

Royal Bafokeng Stadium in Rustenburg will host this year’s Nedbank Cup final between Mamelodi Sundowns and Marumo Gallants on May 28 at 6pm.
Sport
2 weeks ago

Galaxy ground Orlando Pirates to blast away from relegation danger