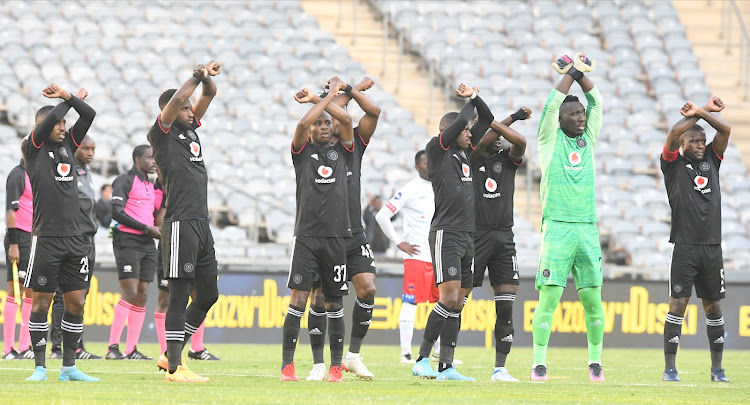 The Premier Soccer League (PSL) is set to be forced to abandon the tradition of having the last two rounds of fixtures played at the same time given that Orlando Pirates are on the verge of reaching the Caf Confederation Cup final.

Pirates' season now seems likely to have to be extended beyond the DStv Premiership's May 21 finish, and this has a knock-on effect in that Bucs' remaining league opponents will also complete the campaign late.

The Buccaneers have one foot in the continental final after they pulled off a hard-fought 2-0 victory over Al Ahli Tripoli in Benghazi, Libya, on Sunday in the first leg of the semifinal. They host Ahli in the second leg at Orlando Stadium this Sunday.

Because of the trip to Libya, Pirates had their match against Royal AM this past weekend postponed and they will also not be able to honour their fixture against Maritzburg United this coming weekend as they are hosting Al Ahli in the return leg. As is tradition, all the other DStv matches of the penultimate round are being played simultaneously, at 3pm on Saturday.

If Pirates reach the May 22 Confederation Cup final at a venue still to be announced, it gets even more complicated as their last match of the season in the Premiership's final round on Saturday May 21 against SuperSport United would also have to be rescheduled.

If Bucs are eliminated from the Confed Cup by Al Ahli this weekend, which seems unlikely given their two-goal lead, their fixtures may still go past May 21 as they are unlikely to be able to play three matches in seven days next week.

Mandla Ncikazi has cautioned Orlando Pirates against complacency for the second leg of their Caf Confederation Cup semifinal against Al Ahli Tripoli ...
Sport
1 week ago

Asked to comment on this conundrum, PSL media manager Fhatuwani Mpfuni admitted Pirates’ season may have to extend beyond the Premiership's final day but said the league is working on a number of scenarios to find solutions.

“We have already communicated to the affected clubs because it is not only Pirates who are affected — Royal AM, Maritzburg United and SuperSport United are also affected,” Mpfuni said.

“We have communicated the different scenarios to the teams involved because it is not going to be possible for Pirates to play this weekend, as much as they couldn’t play last weekend due to their Caf Confederation Cup semifinal commitments.

“We have a few scenarios on the table that have been presented to the affected clubs. For example, if Pirates make it to the final, which looks very likely, it means they won’t be able to complete their Premiership fixtures by the 21st.”

Orlando Pirates have a foot in the Caf Confederation Cup final after a polished 2-0 victory in the opening, away leg of their semifinal against Al ...
Sport
2 weeks ago

Mpfuni added that fortunately Pirates’ outstanding matches do not have a bearing on who is going to win the league as Mamelodi Sundowns are champions. They also don't effect which team is going to be relegated.

“As it stands, and especially if they progress to the final, they won’t be able to complete their season by May 21 because the Confederation Cup final is actually scheduled for the same weekend.”

For Pitso Mosimane, the 4-0 home win against ES Setif in the first leg of Al Ahly's Caf Champions League semifinal would have been sweeter as it came ...
Sport
2 weeks ago

Mngqithi: Sundowns’ row with Chiefs over Al Ahly ‘water under the bridge’

Mamelodi Sundowns coach Manqoba Mngqithi says that there's never a dead rubber when they play Kaizer Chiefs and that they're going to take over the ...
Sport
2 weeks ago