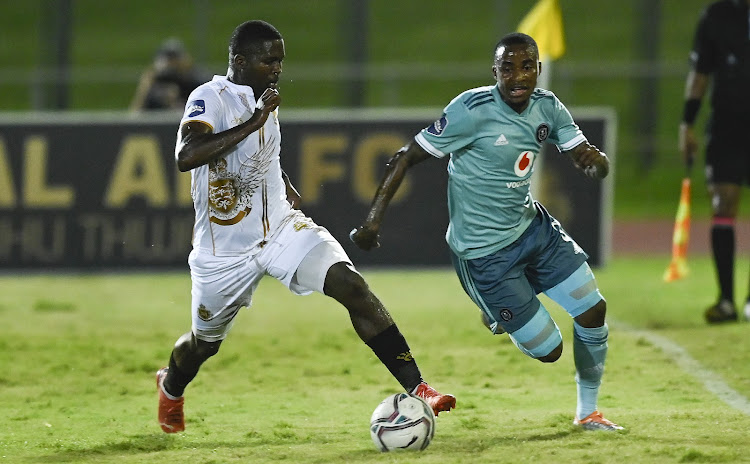 Jabulani Ncobeni of Royal AM fights for the ball with Thembinkosi Lorch of Orlando Pirates during their DStv Premiership match at Chatsworth Stadium on Friday.
Image: Gerhard Duraan/BackpagePix

Orlando Pirates and Royal AM cancelled themselves from finishing second and booking a place in next season’s Caf Champions League after they played to a 2-2 draw at the Chatsworth Stadium on Friday night.

This result confirmed Cape Town City as the team that finishes second in the Premiership and will represent SA in the Caf Champions League alongside champions Mamelodi Sundowns.

Pirates squandered a 2-0 first-half lead as they allowed Royal to come back with Thabo Matlaba and Mfundo Thikazi scoring late goals.

With a draw Pirates can now only finish on 47 points — which Royal are on — if they beat SuperSport United in their last match in Pretoria on Monday.

Royal are currently in third spot after finishing their maiden PSL season on 47 points and are likely to stay there and qualify for the Caf Confederations Cup as they have +4 goal difference over Pirates.

Early goals by Deon Hotto and Kwame Peprah looked enough to give Pirates all the spoils before they allowed the home team back into the match in the last 12 minutes.

Former Pirates left-back Matlaba, who was guilty of not marking tightly on the left in Pirates' goals, scored a scorcher to halve the score for Royal 11 minutes before time and Thikazi scored the equaliser in the referee's optional time.

On top of missing out on a chance to finish second on the log, Royal may also get into trouble with the Premier Soccer League (PSL) if it is found that the number of fans who watched this match was over the 50% capacity which forms part of government health protocols in relation to the fight against the spread of Covid-19.

The 22,000-capacity venue was filled to the rafters on both stands, but with no official figures given it wasn’t easy to ascertain how many people actually watched this match.

Pirates are playing catch-up in their league programme after their three matches against Maritzburg United, Royal AM and SuperSport were postponed due to their participation in the Caf Confederation Cup where they were beaten in the final by Moroccan club RS Berkane in Nigeria on Friday last week.

The match on Monday will not be an easy one for Pirates as SuperSport are also desperate for three points to make sure they keep their record of being the only side to never finish outside the top eight in the PSL era.

Playing with a depleted defence because of injuries, John Maduka’s side started this match off-tune, failing to close down Bucs winger Thembinkosi Lorch who delivered two crosses on the right that resulted in the visitor’s goals.

Lorch was given plenty of room by Matlaba to do whatever he liked and his perfect square pass to Hotto for the opening goal in the second minute.

The left-footed Hotto had an easy tap in before setting up Peprah from another Lorch cross for the second goal four minutes later.

Orlando Pirates co-coach Mandla Ncikazi says should the club fail to make a swift return to the Caf club competitions, it would mean they have failed ...
Sport
1 month ago

Seven players who sparkled during the DStv Premiership season

The Premier Soccer League (PSL) season will come to an end on Monday after another dominant performance by Mamelodi Sundowns with their unprecedented ...
Sport
1 month ago

Bafana coach Broos: ‘By September we may have already qualified’

Bafana Bafana coach Hugo Broos is of the opinion that two victories against Liberia could be enough for the South Africans to book their ticket to ...
Sport
1 month ago