Dr Hloni Bookholane writes about his journey in the medical profession, and what it’s really like to save a life 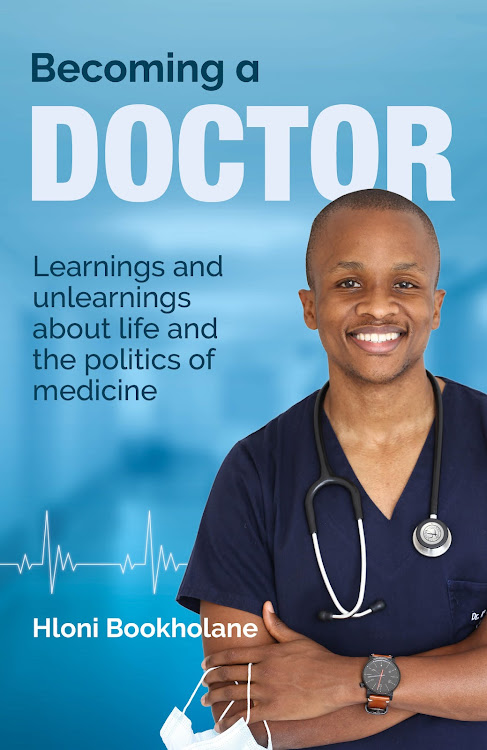 THE HEART OF THE MATTER 'Becoming a Doctor' by Hloni Bookholane
Image: Supplied

From student to intern at the world­-famous Groote Schuur Hospital in Cape Town to the best school of public health in the world across the Atlantic, and back home amid the Covid­-19 pandemic, this is the reality of becoming a doctor. Below is an extract from Becoming a Doctor: Learning and Unlearning about Life and the Politics of Medicine by Dr Hloni Bookholane.

If you have watched Grey’s Anatomy from season one, you may have a very cinematic idea of what being an intern in a major hospital might be like. Sometimes it is, to be honest. Covering 21,000 steps at work, sometimes more, is not uncommon among doctors, especially interns. The academic hospitals in which we work are not small buildings. The magnitude is something to behold. For example, Chris Hani Baragwanath Hospital (Bara) in Gauteng is the largest hospital in Africa and the third-largest in the world. The world! I have never set foot inside that hospital but if I think you need an Uber to get from A floor to G floor at Groote Schuur Hospital (GSH) – a hospital about three times smaller than Bara – I can only imagine how big Bara is. GSH, though smaller than Bara, is still big: seven floors from A to G but with service floors sandwiched between each functional floor, which makes at least fourteen. There are corridors that are 400 metres long and a matrix of interconnected tunnels that put you in mind of EB Cloete Interchange in Durban, aka Spaghetti Junction, or the White House tunnels.

Imagine working a full day plus overtime, not sleeping, nibbling on a few snacks, hardly drinking and covering ten kilometres or a half marathon all at the same time? Yes, it happens more often than not. You leave the hospital post-call thinking that Shonda Rhimes could never have conceived of the scenes you have just witnessed. You really cannot make up some of the stuff that junior and senior doctors in South Africa see in our hospitals, sometimes on a daily basis. Whether it is the banal horror stories of overwhelmed emergency and trauma units – multiple gunshot wounds, motor-vehicle accidents, community assault, gender-based violence and death – it’s a lot to deal with as a twenty-something-year-old. Then there are the infectious diseases, cancers and non-communicable diseases with resultant organ failure that junior doctors see.

CPR is hard. Sometimes ribs get broken, and you sweat – a lot! They don’t show you that on ‘Grey’s Anatomy’.

If 2020 has been good for anything, it’s giving the public an idea of what doctors and other healthcare workers actually go through. Being a junior doctor in South Africa is an incredible privilege, it really is. We get to play a part in saving and enhancing lives, and often we get to welcome new life into the world in the many labour wards in our hospitals.

However, medicine is also mentally and emotionally taxing. Being involved in unsuccessful resuscitations, certifying deaths, seeing multiple patients’ clinical conditions deteriorate and breaking the bad news of a terminal cancer to a patient – I have done all the above, sometimes on the same day.

Your workday is nothing like the workdays of your friends and peers who are not in the healthcare profession, so you feel quite apart from them. Your days are incredibly human, visceral and triggering. But they are also indelibly rewarding. In 2016, when I was in fourth year, my clinical partner, Matthew How, experienced the first of many versions of this reward. It had been a busy day in C15 and we were doing a decent job of clerking patients and absorbing the tips from the doctors in impromptu bedside tutorials. I was about to take some blood from a patient when I saw Matt walking towards the resuscitation area with the C15 consultant, who was audible from all corners of the hospital most of the time. A patient was being wheeled there in a type of controlled hurry that is typical of an emergency unit with extremely qualified doctors.

I asked Matt what was happening and he clasped his hands together and signalled CPR. At the time it seemed odd to me that there wasn’t the rush and chaos that you see in Grey’s Anatomy when they shout “code blue”. I took a patient’s blood and sent it through the mysterious “chute”, a small capsule that goes through some pipes in the walls and gets to the laboratory. Magic. And then I headed towards the resuscitation area and peeked through the curtain. There was a sweaty Matt doing CPR, the registrar intubating, the nurse handling the red trolley and the consultant giving intravenous drugs.

Things were happening quickly and I was standing there watching Matt, who asked me if I wanted to swap with him and continue CPR – though the beads of sweat on his face signalled that he needed me to give him respite. We had a smooth exchange and I continued doing chest compressions to the rhythm of the Bee Gees. This wasn’t a drill any more; this was the real thing.

I wish medical writers for TV shows like Grey’s Anatomy would practise doing real CPR before they write scripts for those ridiculous and pathetic scenes in which the person doing chest compressions is merely massaging the chest. CPR is hard. Sometimes ribs get broken, and you sweat – a lot! They don’t show you that on Grey’s Anatomy. Matt and I did this for just over twenty minutes, swapping every two minutes, sometimes four. We were both sweating. We didn’t shock the patient with defibrillators – something else they do horribly and dangerously on these TV shows. What is dangerous is that stupid thing they do when they rub the paddles together before placing them on the patient’s chest. YOU DO NOT DO THAT. EVER. Moreover, you don’t shock every patient who collapses with cardiac arrest. This is why Matt and I were doing CPR for so long: the patient did not have a shockable cardiac rhythm.

That’s what happened with this patient: their problem was their heart, not the heart’s electrical system. They had pulseless electrical activity (PEA), which meant CPR, adrenaline and repeat until she came to. Fortunately, she did. Then she arrested again. Then she came to again.

The patient was taken to the high-care unit and much of what happened in C15 after that was a bit of a blur. I do remember at the end of the day when Matt and I were leaving and I said something to the effect of, “We literally saved her life, twice,” and he responded in a way that affirmed what I was saying but also the cost of a life saved: “I know, man. But I think I also broke her ribs.”