Lacuna is a competing narrative to Disgrace, writes Fiona Snyckers 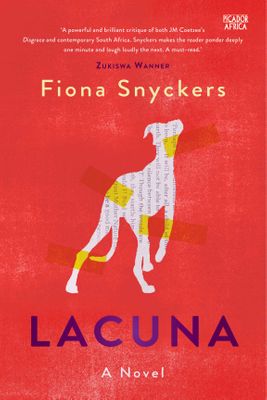 I read Disgrace by JM Coetzee in 1999, the year it came out. I have seldom been so enraged by a book, while simultaneously admiring the clarity of the prose and the power of the story. I found myself having loud arguments with Coetzee in my mind as the book garnered awards and critical attention.

The perspective that I felt was missing from Disgrace was that of Lucy Lurie, the protagonist's daughter. Lacuna is my attempt to provide the missing perspective - to explore how a young South African woman might really react to a gang rape.

An unexpected obstacle was that the harder I tried to criticise Coetzee in my novel, the more I ended up defending him. I started out with the knee-jerk reaction that a male writer has no right to appropriate the story of a female rape survivor.

But in the end, I couldn't convince even myself of this. The best I could come up with was that if you don't like the story someone else has told, write your own story. This is what Lacuna is - a competing narrative to Disgrace.

Most of the research I did was into the stories of rape survivors, as told in their own unfiltered voices. I was interested in how differences of race and class affect and inform the experience of survivorhood. Access to medical care and mental health support make all the difference to how people recover from sexual assault. Another crucial factor is for the victim to be removed from the presence of their attacker. Thousands of people in SA have no recourse to these essentials, making their experience very different from my white, middle-class protagonist.

I also wanted to explore the notion of "hierarchies" of rape. Can one kind of rape be regarded as objectively "worse" than another? Can trauma be quantified in this way, and is it helpful to try? My version of Lucy Lurie wrestles with these issues as she struggles through her PTSD.

I would like readers to think carefully about the limits of language and metaphor. In Disgrace, Coetzee sets up what I believe to be a flawed metaphor. He compares the overthrow of white supremacy in SA to a white woman being raped by a gang of black men. Her response is to invite them to live on her farm with her, so that they can share the land and farm it together. The child she is carrying becomes a messiah figure that will be a "child of this earth" and shape future generations.

The metaphor fails in as much as a woman being gang-raped can never work as an image of natural justice. Most right-thinking people would agree that the overthrow of apartheid and the subsequent challenges to white supremacy have been both just and necessary. White people should not become objects of pity in this scenario.

Coetzee was sent an earlier version of the manuscript. I have no idea whether he read it or not. It doesn't really matter. It is our respective books that are now in conversation with each other. What the authors have to say to each other is less important.

Lacuna by Fiona Snyckers is published by Picador Africa, R270