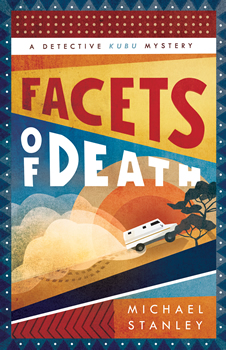 It’s not every day you get the chance to chew the fat with two people from the only continent you haven’t visited. So when offered the chance to talk to Michael Sears and Stanley Trollip — the dynamic duo behind the pen name Michael Stanley and the award-winning Detective Kubu mystery series — I dove in.

Sears and Trollip are both South Africans, and each book in their series tackles a contemporary southern African issue. In the six novels to date (plus a cookbook), they’ve taken Detective Kubu across the continent.

In Facets of Death  (out now from Poisoned Pen Press), a prequel story to the rest of the series, Detective Kubu goes back to where it all began—his first day on the job.

In this The Big Thrill interview, the authors share some insight into their writing process, the inspiration for Facets of Death, and what readers can expect from them next.

Thanks for the chance to talk about Facets of Death . Why, after six novels, did you decide to go back to where it all began for Detective Kubu? Did you learn anything about him while you were writing this book that surprised you?

Michael Sears: When we started writing our first book, A Carrion Death, we didn’t plan that Kubu would be the protagonist. As novice novelists, we heeded the advice of the experts, who said we should write about what we knew. So, as academics, we planned that a brilliant young ecologist would discover a body that had been left in the desert for hyenas to devour, and go on to solve the mystery. It didn’t take long for him to realise it was a murder, so we had to have a detective investigate. 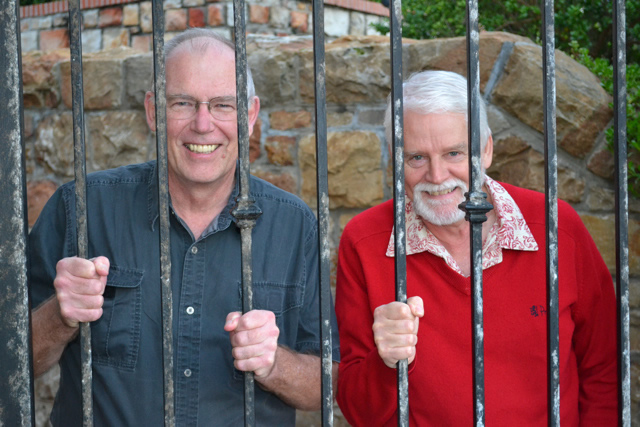 Stan Trollip and Michael Sears, better known as the writing duo Michael Stanley, in Cape Town’s Kalk Bay, shortly before one of their first book events.
Image: The Big Thrill

Stan Trollip: So Kubu walked out of his office, set himself up with sandwiches and cassette tapes of his favourite operas, and headed out. It’s a long drive in unfavourable conditions to where the body had been found in the middle of the Kalahari Desert, so he had plenty of time to think. One thing he mused about was how a Bushman school friend had shown him how to see things in the desert that were invisible to most people. That was the spark that made Kubu want to become a detective. He would train himself to look beyond the obvious.

MS: By the time he reached the scene of the crime, he’d taken over the story and demanded to be the protagonist. We were both surprised.

ST: As Kubu developed over the series, we learnt more about his school and family life, but really nothing about how he became Botswana’s ace detective. That was not only a gap in his background, but also in his character. So we decided to write that story, starting with his first day at the Criminal Investigation Department (CID).

What can readers expect to love about the book?

MS: We hope they’ll love Kubu’s struggle to find his role in the CID, and seeing him grow rapidly as a competent detective.

ST: We also hope they will see the person who is Kubu—a man who is sure of his intellect, but totally at sea when it comes to his emotions, particularly romantic ones.

The book is centered on the diamond trade in Botswana. It’s an industry that touches almost everyone in the world in some way or another, but not one that many people know much about. What surprised you when you were researching the book?

MS: I spent 10 years working for the parent company of De Beers in the geophysics area, so I knew quite a lot about the industry at the mining end. But the Jwaneng mine in Botswana is remarkable in many ways. It’s the richest diamond mine in the world with 70% of its output being gem quality. That’s very high. And it ships out 10 million carats of rough diamonds a year. If all those ended up as retail diamonds, they would be worth $150-billion. So the idea of a team of robbers stopping at nothing to get their hands on some of that was very natural. It struck us at once as a great premise for a book.

ST: Botswana relies heavily on the industry, and did even more so at the time when Facets of Death is set (1998). A successful heist could have knocked investor confidence and hit the economy. So a heist would be a very big deal.

The Constitutional Court has declined to confirm a high court order which declared that a section of the Diamond Act was unconstitutional.
News
5 years ago