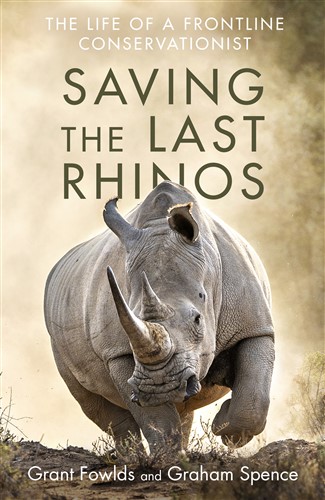 Co-authored by Graham Spence, this book is a story of a man dedicated to conserving Africa's rhino population.
Image: Jonathan Ball

What would drive a man to “smuggle” rhino horn back into Africa at great risk to himself?

This is just one of the situations Grant Fowlds has put himself in as part of his ongoing fight against poaching, to prove a link between southern Africa and the illicit, lucrative trade in rhino horn in Vietnam.

Shavings of rhino horn are sold as a snake-oil “cure” for colds or impotence, but a rhino’s horn has no magical or medicinal properties.

It is owing to these misconceptions that rhinoceroses are being killed at an escalating rate that puts the survival of the species in jeopardy.

This corrupt, illegal war on wildlife has brought an iconic animal to the brink of extinction.

In 2016 the number of rhinos poached in SA stood at 1,054 (Department of Environmental Affairs).

Growing up on a farm in the Eastern Cape, Grant Fowlds developed a deep love of nature, turning his back on hunting to focus on saving wildlife of all kinds and the environment that sustains both them and us.

He is a passionate conservationist who puts himself on the front line of protecting rhinos in the wild – right now, against armed poachers; but in the longer term, too, through his work with schoolchildren, communities and policy makers.

Rhino killed every 10 hours in Africa, births not keeping up with poaching losses

World rhino populations have reached a tipping point as births are no longer keeping up with poaching losses.
News
2 years ago