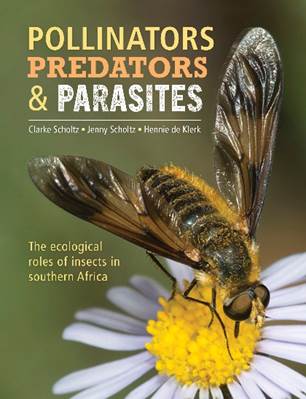 This publication details the latest research in the field of entomology and will appeal to students, academics and nature enthusiasts.
Image: Supplied

Insects arguably play the most important roles in the functioning of the Earth’s ecosystems – the natural world could not succeed without them. And Southern Africa is especially rich in insect diversity, which is intricately examined in this important book.

Authoritative and lavishly illustrated, the book is structured around Southern Africa’s 13 distinct biomes. It:

• reflects the essential role insects play in most ecological processes such as pollination, predation, parasitism, soil modification and nutrient recycling;

• details how insects serve as food for multitudes of other organisms, including bacteria and fungi, as well as specially adapted plants, reptiles, birds and mammals;

• features about 1,600 photographs to depict the region’s insects and phenomena described in the text;

• includes a guide to each of the 25 insect orders found in Southern Africa, with images showing representative species

Clarke Scholtz, emeritus professor of entomology at the University of Pretoria, continues to teach undergraduates, supervise postgraduates and conduct entomological research. He has published many papers on insect systematics, biology and conservation, and has authored or co-authored a range of books on the insects of Southern Africa.

Jenny Scholtz studied nature conservation and worked for a conservation NGO. Her focus later turned to the study of insects, culminating in her co-authoring this book.

Hennie de Klerk studied and worked in the field of metallurgy but has nurtured a lifelong interest in insects, dedicating his leisure time to photographing creatures in the wild, with a focus on insects and bird behaviour.

Entomology enthusiasts - this one's for you

Insectopedia uncovers the fascinating and infinitely varied world of insects. It explores their intriguing behaviour and biology – from mating and ...
Books
3 years ago

Is the pangolin the vector for Covid-19?
Books
1 year ago

A lyrical and personal account of encounters with elephants

Learn how elephants live, travel, mate, raise children and relate to one another, and reflect on how they think and feel.
Books
1 year ago