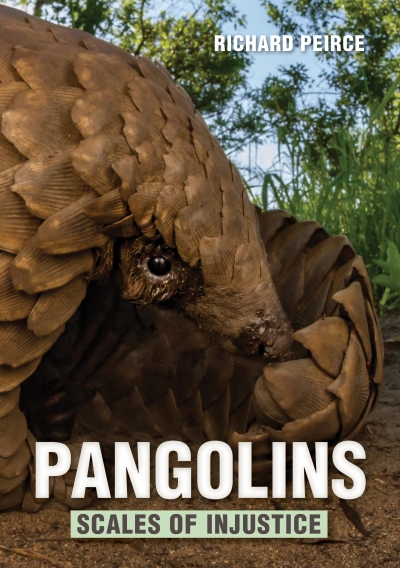 The pangolin must be nature’s oddest mammal. It has been on this earth for 80 million years and is the only mammal with scales, something that keeps it safe from almost all predators, except for one – humans, who have, of course, been around for a lot less time.

There are eight species of pangolin in the world, four in Africa and four in Asia, and all are vulnerable to human greed. Both meat and scales are sought-after in the Far East, and in 2019 alone, 97 tonnes of pangolin scales that were being illegally traded were intercepted. That represents almost 2,000 dead pangolins – and you can bet it was just the tip of the iceberg.

In this elegantly produced book Richard Peirce takes his readers on a journey, first telling the story of one pangolin caught by a poacher in Zimbabwe, smuggled into SA, rescued, nursed back to health and finally released at Phinda. There is sympathy for the poacher, driven by poverty, but none for the middlemen or the end users. This is a story with a happy ending, but for many animals there will be no such outcome.

From there, Peirce moves on to the Tswalu reserve in the Kalahari, where a great deal of research into pangolins is undertaken. He describes how these animals captivate the hearts of their researchers and conservators as well as tourists. But the final part of the book is darker – the horrors of the wet markets in China, Laos and Vietnam and the suggestion that pangolins, because of the way they are treated in those markets, were inadvertently the vectors that brought the bat virus that is Covid-19 to humans. The link has not yet been proved, but seems increasingly likely.

Covid-19 has been a game changer in many respects. Will it slow the demand for these animals? Or will it lead to more desperation and therefore more poaching? Will the damage to the tourist industry mean that conservation efforts will become unaffordable? Or could it make people rethink their consumerist priorities? At this stage, these questions are unanswerable but this book brings them, and many others, centre stage.

Rhinoceroses are some of the largest remaining members of megafauna, their lineage dates back to 50-million years ago, and South Africans and ...
Books
1 year ago