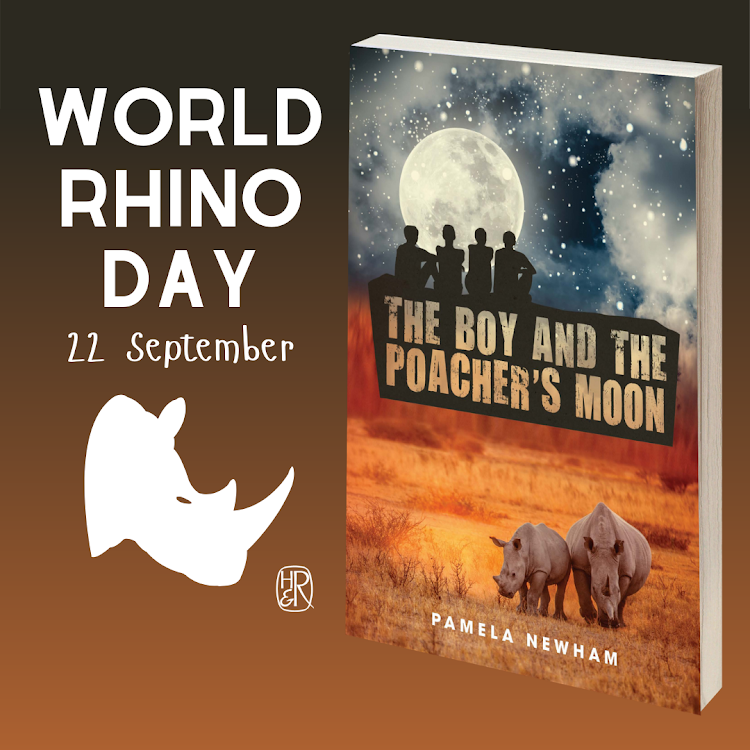 Rhinoceroses are some of the largest remaining members of megafauna, their lineage dates back to 50-million years ago, and South Africans and international tourists/wildlife aficionados alike are equally enthused by spotting these magnificent keratin-carrying creatures.

Derived from the Ancient Greek for rhino ('nose') and keras ('horn'), it is owing to the misconception that their horns contain medicinal properties - from supposed aphrodisiacs to curing fever - that the five rhino species found worldwide (the black rhino and white rhino being endemic to eastern and southern Africa) are listed as critically endangered or threatened.

World Rhino Day, celebrated annually on September 22, raises awareness about the dire predicament these ancient animals are currently facing, and which local author Pamela Newham draws on in her conservation-cum-adventure novel, The Boy and the Poacher's Moon.

Billy, our young protagonist, is one of four finalists selected to spend a weekend with the conservation organisation Wild2Save, based in the Kruger. On his first night there a game drive to the nearest watering hole escalates into far more than the hope of spotting a member of the big five: they encounter a group of ruthless rhino poachers, and the grisly reality of rhino poaching is laid bare.

Here Newham chats all things conservation, writing for teens, and her new-found obsession with rhinos.

The Boy and the Poacher's Moon is your third YA novel. Please discuss the necessity of writing books about conservation efforts for a younger audience.

In my experience, children and teenagers are generally interested in wild animals and deeply concerned with their well-being. We are privileged to live in a country that boasts a wide diversity of wildlife and while it is easily accessible to many, not all children are given the opportunity to experience these creatures in the wild. I think it is important for stories about our wildlife heritage to be made available to all children as conserving our game for future generations is important for us all.

Your main characters - Billy, Vusi, Surina, and Jabu - come from vastly different backgrounds and are all vying for a bursary to study conservation. Surina aside, the remaining three share an active passion for wildlife and conservation. Please elaborate on:

a) the inclusive nature of working in conservation and

b) for those who are (yet!) to read The Boy and the Poacher's Moon why Billy, Vusi and Jabu (a shy boy from Cape Town, the lively son of a Hluhluwe-Imfolozi game ranger, and an erudite Jozi girl who blogs about wildlife) are drawn to conservation

When I planned my novel, I wanted to include children from different backgrounds to show that a love of wildlife and an interest in conservation was not confined to any particular sector of the population. The Wild2Save competition was a way to bring these children together. In our game reserves, especially the Kruger National Park, rangers, trackers and other staff members are also drawn from all sectors. Billy’s interest in conservation comes from his uncle who is passionate about the subject. Even though he lives in Cape Town, he spends a lot of time hiking in the mountains and learning about the plants and animals indigenous to the Cape. Vusi’s father is a game ranger and he has spent a lot of time in the Natal parks. Jabu has a deep desire to become a wildlife photo-journalist when she leaves school.

The title draws on poachers' inclination to maim rhinos during full moon and the novel is, ultimately, centered around the illegal trade in rhino horns. What can actively be done to combat rhino poaching?

My knowledge comes from a great deal of research, and my imagination. When I first started researching the subject, there were ant-poaching units in Kruger but nothing like the para-military task teams we have today. I believe that everything that needs to done to prevent this scourge is being done. SANPark’s rangers, the SANDF and the Organised Crime Unit are all working towards catching the poachers and the middle men that enable the horns to leave the country. They make use of helicopters, drones, tracker dogs and rangers on horse-back.

Thandi, a young Wild2Save game ranger, quotes the following statement pertaining to poaching: "They say that for the people involved, the word 'poaching' means money and the word 'rhino' means nothing." The eponymous boy in the title is unwillingly drawn into poaching, on account of living in abject poverty. Can you tell us a bit more about him, and why you decided against giving him a name?

It’s interesting but I have no memory of deciding not to name him. I think it came from the fact that the poachers are shadowy figures. They have not told him their real names and call him ‘Moshanyana’ which means ‘boy’ – indicating that they have no interest in him other than to carry for them. He is the same age as the other teens and I wanted to present a comparison between their lives and his. The Boy is not a bad person but has been drawn into poaching because of poverty and his desire to care for his family.

The Boy and the Poacher's Moon is a conservation story in as much as it is an entertaining teen read as it includes references to social media, slang words, and clumsy flirtation. Did your previous job as English teacher 'prepare' you to tap into the minds of teenagers?

If you are going to write for teenagers you need to tell a story in a way that they can relate to. I loved teaching teens and this definitely helped me to tap into their way of thinking. Amazingly, I am still able to tap into my inner-teen!

From 'boet' and 'oke' to 'tshukudu' and 'mhlungu', you frequently make use of words which are true to SA's lexicon. Was this an intentional decision to resonate with a broader Saffa readership?

I couldn’t imagine writing a book about South Africa that did not include our wonderfully diverse population. By using local phrases and words, I hope to appeal to a broad readership.

And, lastly, what particular significance do you attach to these remarkable odd-toed ungulates facing near-extinction owing to human greed and the misconception that their horns have medicinal value?

While rhinos had always appealed to me in that they seemed to be the closest animal to dinosaurs, it was only when I read Killing for Profit by Julian Rademeyer that my interest in these animals - whose fate is governed by greed and ignorance - became a bit of an obsession.

KwaZulu-Natal's Hluhluwe-iMfolozi Park (HiP) will receive crucial technology to aid in the fight against poaching.
News
1 year ago

What would drive a man to “smuggle” rhino horn back into Africa at great risk to himself?
Books
2 years ago