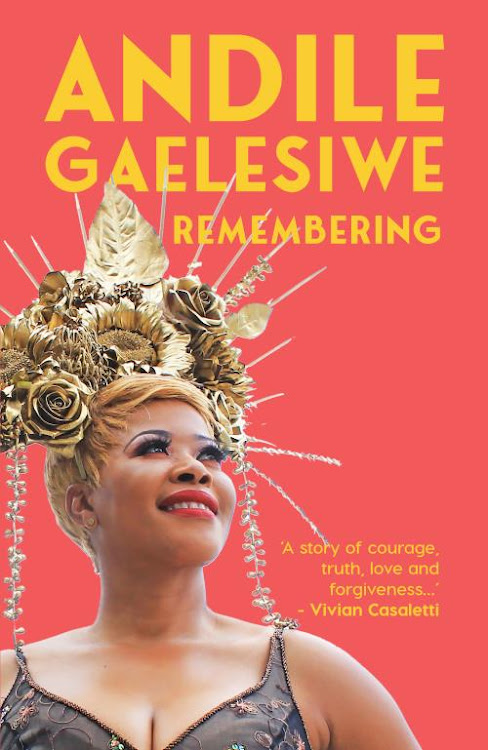 ‘Scorched by abuse, Andile grew into the beauty she is, in mind, body and soul.’ - Vukani Mthintso

Andile Gaelesiwe is celebrated across SA as the adored host of Khumbul’ ekhaya on SABC 1. Yet few know that behind the glamour of her public image, there is a vulnerable girl from Meadowlands, Soweto.

Gaelesiwe  grew up in a time of turmoil, not only in SA, but also in her family. This led her to look for her biological father who then betrayed her in the worst possible way. In the late 1990s she took the music industry by storm when her first single Abuti Yo was released.

Remembering is Gaelesiwe’s fierce, and at times funny, memoir. It touches on serious issues of rape and patriarchy, but also reveals a woman with a will of steel, music in her soul, and a commitment to living to the full.

Gaelesiwe hosts the popular TV shows Uthando Noxolo and Before I Do. Founder of the GBV response NGO, Open Disclosure, she has also been the Amnesty International anti-­sexual violence ambassador. Gaelesiwe has released five albums.

Accomplished businesswoman Andy Kawa’s life was changed irrevocably when, on a summer’s day in 2010, she took a stroll on the popular King’s Beach in ...
Books
1 year ago

For more than two decades, Elizabeth Nyamayaro has been instrumental in creating change in communities all around the world and uplifting the lives ...
Books
9 months ago

One half of a powerhouse showbiz couple speaks out about her abuse at the hands of her famous husband in a memoir that is riveting reading, writes ...
Books
1 year ago