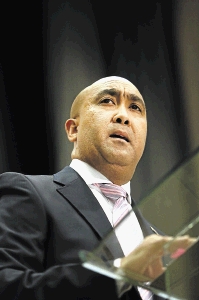 National director of public prosecutions Shaun Abrahams has appointed a team of top prosecutors to focus exclusively on criminal cases related to state capture and the Guptas.

The Sunday Times has reliably learnt that Abrahams announced the establishment of the team.

The move comes amid an outcry about Abrahams's silence in light of mounting evidence of state capture.

Advocate Malini Govender, the acting head of the specialised commercial crimes unit, will supervise the team.

The prosecutors were instructed to help the Hawks fast-track investigations and to review parts of the law related to the National Prosecuting Authority to determine legal constraints the institution faced in relation to its mandate.

The team was appointed to "render the requisite assistance to the Hawks investigators in respect [of] all matters arising from the State of Capture report", said NPA spokesman Luvuyo Mfaku.

"We regard the allegations seriously, hence the NDPP appointed the team of prosecutors [to] ... render assistance to the Hawks in their investigations into these matters," he said.

The NPA has come under fire for its inaction in the face of mounting evidence contained in a large cache of leaked e-mails showing how the Gupta family and their associates captured key state institutions, especially parastatals.

Money laundering, corruption, tax evasion and bribery are among some of the potential crimes that could be investigated, based on the leaked e-mails.

DA leader Mmusi Maimane criticised the NPA this week, but the authority said the law limited its role.

"Silence on the part of the NPA should not be [mis]construed as inaction. The NPA team is working closely with the Hawks investigators as stated before," Mfaku said.

The law did not allow the NPA to be at the forefront of investigations, he said.

We regard the allegations seriously

A source at the NPA said there was mounting frustration among senior prosecutors over the "tardiness and sloppiness" of the Hawks.

"Simple things like tracking people down are taking forever. We could do their work easily but they throw the law at us," the source said.

However, both the NPA and the Hawks denied a breakdown in their working relationship. "The NPA, through its methodologies in its specialist components, is required to provide support and assistance to the Hawks and, as such, guide Hawks investigations - [in a process] commonly referred to as prosecutor-guided investigations," Mfaku said.

The Hawks defended the delay in finalising Gupta investigations, saying these kinds of cases took longer than others.

"It is not uncommon for corruption and fraud investigations to take longer than anticipated.

"This can be compounded, for instance, by volumes of material which makes for time-consuming work," said Hawks spokesman Brigadier Hangwani Mulaudzi.

The Hawks were faced with the challenge of relevant information being "archived elsewhere or even deleted", said Mulaudzi.

"Trying to recapture that can be time-consuming, especially if you're working with external entities. Issues of transcribing, downloading and analysing the information as it is compiled can also become an impediment," he said.

The Hawks would not say how many cases were being investigated or whether any arrests would soon be made.

Just a month after Des van Rooyen took office as minister of co-operative governance and traditional affairs, he met Gupta associates to give them ...
Investigations
4 years ago

Nkosazana's hand was out for favours too

ANC presidential hopeful Nkosazana Dlamini-Zuma asked the Gupta family to pay for a business-class ticket for a Cameroonian reporter to visit South ...
Investigations
4 years ago