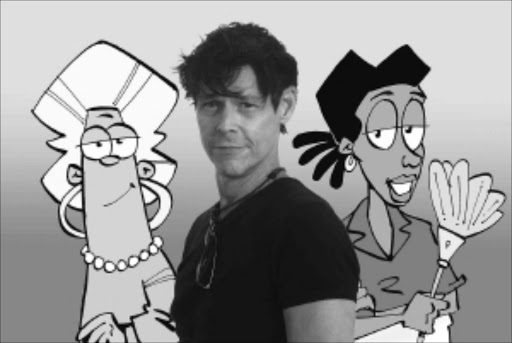 Stephen Francis is the writing half of the cartoon strip Madam & Eve, which he created with Rico Schacherl. Francis speaks to Adele Shevel about life as a cartoonist, and why he'd love to be sued

When people ask what work you do, what do you say?

I usually say I'm a writer. If they ask what I write, I say movie, TV and corporate scripts and cartoons. Only if they keep pressing, do I finally mention Madam & Eve. I don't know why I do this, but I think it's because it somehow changes peoples' perceptions of me. Either people make a big deal over it, which makes me uncomfortable ... or they suddenly get wary, being careful what they say in case they might end up portrayed in a cartoon. So usually, I just say writer.

The only time I mention Madam & Eve right away is if I think it will impress some chick who I want to sleep with. But I can't use that because I'm in a relationship now and frankly, she's more impressed if I remember to leave the toilet seat down.

How did you get into the world of cartoons?

I started drawing and doodling at an early age. As a teenager, I was in a rock band and I used to write and draw cartoon strips about the band's 'adventures'. At university, I had my own cartoon strip in the school newspaper. But it wasn't until I came to this wonderful country that I seriously thought I could make a living from it. The way we work is - I draw a rough version of the cartoon - almost like a 'blueprint' - and Rico uses it as a guide to work his own magic.

Who is your favourite cartoon character (not one of yours)?

That's a tough one. I'd have to say either George Bush, Jacob Zuma or Julius Malema. Oh, wait. Those are real people. But they certainly come up with great material.

Where does your inspiration for Madam & Eve come from?

People are always surprised when they learn that the idea for Madam & Eve came from an American. But I think that's what gave me an advantage.

Coming here as an outsider, I was able to see things from a different perspective. I first came here because my first wife was South African. So the first 'madam' I ever knew was my mother-in-law. She used to complain about the maid; once the maid trusted me, she'd complain about the mother-in-law. This was a unique relationship, and although complicated, it had lots of comedy potential. And so the seed was planted.

What is the biggest joy you get from your work?

Making people laugh, and hopefully making them think at the same time. And also proving all my teachers and family members wrong who used to tell me that drawing all over my notebooks was a waste of time.

What is the biggest challenge about what you do?

Meeting deadlines. And finding a way to make people laugh, even when current events are tragic.

What traits make one a good cartoonist?

Sense of humour, talent, discipline to meet deadlines and the ability to observe; to see things from a different perspective: the comedic perspective.

Can one make a living out of being a cartoonist?

It's very difficult. Cartoonists overseas make money from syndication. One cartoon a day - but that cartoon appears in 1500 newspapers, with each newspaper paying a fee. The money's phenomenal.

The problem here, though, is that there aren't that many papers. We've been lucky with Madam & Eve - we also do merchandise, endorsements, even products. But Madam & Eve isn't all we do. I write movies, television, corporate videos and theatre, and Rico does a great deal of cartoons and graphics for many blue chip clients. Our company, Rapid Phase, is actually a small creative agency, with Madam & Eve being just one of the things we produce.

Up early, the first thing is read the newspapers, check the internet and television. One of the challenges of Madam & Eve is finding a way to bring in what's topical and what's currently going on in the country, and how it affects the characters in our cartoon strip.

What do you read or watch to keep abreast of life in SA?

Is it only South Africans who read Madam & Eve, or others too?

One of Madam & Eve's greatest strengths is the fact that it's so South African. Thanks to the internet, we have fans all over the world. It began with expats - but now we're finding more and more people who have never even visited our shores discovering Madam & Eve - and learning more about SA, which is fantastic. On occasion, though, we'll get an e-mail from someone in say, Canada, who will write: 'Loved today's cartoon ... but please tell me, what is a "mielie lady"?'

Do people ever want to sue you?

No, and this is very upsetting. The publicity it generates is golden. It can double, even triple your book sales. The problem is, Madam & Eve has become so much a part of South African culture and, if I may say so, iconic and beloved. We love to make the strip satirical, it's gentle satire. Suing Madam & Eve at this point would be like, I dunno, suing the Easter Bunny. So anyone out there ... sue us! Please! We could use that publicity!

Can cartoons make a difference in society?

Of course. Cartoons have been the cause of lawsuits, jihads, losing elections, winning elections, scandals, exposing hypocrisy and so on. We want people to read Madam & Eve - and laugh. And hopefully do some thinking about what's so funny.

What else do you do apart from Madam & Eve?

I've done lots of writing for movies and television, which I love.

I've written three movies, shot here in SA, and many television series - everything from episodes of my own show, Madam & Eve, to dramas like Soul City and Zero Tolerance. Even soap operas such as Scandal!, which are always fun. I also do a great deal of corporate theatre work, combining education with comedy. At the moment, I'm developing several horror movie scripts, but I'm not supposed to talk about that yet.

How many publications does Madam & Eve appear in?

Rico and I were extremely lucky with Madam & Eve. We launched it just at the right time - just when things were changing in a big way - and the cartoon strip was immediately successful.

Newspapers began calling us asking if they could publish it. It was very exciting. It even became a news story itself - South Africans ready to laugh at themselves - that we were getting calls from publications all over the world. From Newsweek to the Washington Post, the Wall Street Journal and the New York Times.

Believe it or not, Madam & Eve was first published in 1992, so we're coming on our 20-year anniversary.

Twenty years. It's hard to imagine. You'd think Madam would at least give Eve a raise by now.