Consumers and motorists will suffer as fuel races towards a record high of R12 a litre, writes RENÉ VOLLGRAAFF 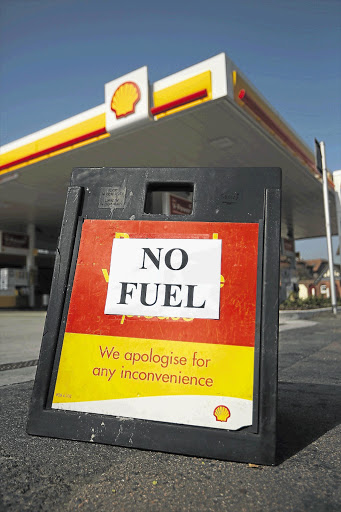 From Wednesday, it will cost almost R100 more to fill a 50-litre petrol tank than it did a year ago.

The petrol price increase of 71c/litre for 95 octane petrol in Gauteng will be the single biggest increase since July 2008, when Brent crude oil price reached a record high of $144/barrel and the rand started weakening to more than R8 to the dollar as the global financial crisis took hold.

The Department of Energy announced on Friday that 95 octane petrol will from Wednesday cost a new record high of R11.94 a litre. At the coast the pump price will increase by 66c to R11.59.

In some inland areas, such as Kenhardt in Northern Cape, petrol will cost more than R12 a litre due to differences in transport costs between fuel price zones.

This will add to the burden on consumers who are already paying for double-digit electricity tariff increases. The higher fuel price will have a knock-on effect on consumer goods like food.

When the retailers' margin is added, diesel will also cost more than R12/litre in some areas.

The price hikes follow an announcement in the February national budget that the general fuel levy would rise 20c/litre and the Road Accident Fund levy 8c/litre.

The rest of the increase is due to a jump in transport costs, which rose by as much as 22c/litre in some areas, and an average under-recovery on the petrol price of 37.5c/litre for March.

The D epartment of Energy said the under-recovery was due to an increase in the products prices for petrol, diesel and paraffin.

The average Brent crude oil price increase was almost $6 higher in March than in February.

Without the slight appreciation of the rand-dollar exchange rate last month, the increase in the petrol price would have been 5.41c more.

Over the last few weeks analysts have mentioned the possibility of a shortage of oil and fuel in South Africa if imports from Iran are stopped and the fuel price increases due to the increased transport cost of replacement oil from sources other than Iran.

According to the deputy director-general for hydrocarbons at the Department of Energy, Tseliso Maqubela, there is no expectation of any oil or fuel shortage due to geopolitical tension.

The cost of replacement crude oil would present a challenge, he said.

"Some of the crude oil comes at a premium and this is bound to affect the companies that have to make those [source] changes," Maqubela said.

What goes into the fuel price?

Levies and taxes will from Wednesday account for more than 24% of the price of a litre of petrol.

The retail price of petrol and diesel is regulated by the government and changes every first Wednesday of the month.

According to the SA Petroleum Industry Association, the petrol price is composed of a number of price elements - international and domestic.

The international element, or basic fuel price (BFP), is based on what it would cost a South African importer to buy petrol from an international refinery and transport it to SA. Components of the BFP include international petroleum market spot prices, freight cost to South Africa, insurance costs, ocean loss allowance, cargo dues, coastal storage and stock financing cost. The BFP is mostly influenced by changes in the rand-dollar exchange rate and the international crude oil price.

Transport costs from coastal harbours to inland depots are in the domestic elements of the price.

The costs differ in various places, so the petrol price is not the same countrywide.

The domestic elements also include delivery costs from the depot to service stations, a wholesale margin paid to the oil company through whose branded pump the product is sold, to compensate for marketing activities, a fixed retail margin of 91.8c/litre, a slate levy, to recover money "owed" to the oil companies due to time delay in adjustment of the petrol pump price and a demand-side management levy (DSML) to curb the demand for high-octane petrol.

Diesel's retail price is not regulated, so the price differs between retailers.

The general fuel levy of 197.5c (182.5c for diesel), customs and excise levy of 4c and Road Accident Fund levy of 88c make up the rest of the domestic fuel price.